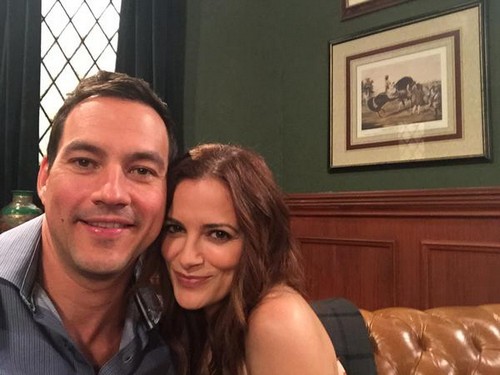 Here are some “General Hospital” spoilers for the Wednesday May 20 episode of the hit ABC soap. Now that Anna Devane (Finola Hughes) whacked Carlos Rivera (Jeffrey Vincent Parise), she and Commish Sloane (Grayson McCouch) make a plan to cover up what was done. While Sloane is unsure about how will this work out, he’s committed to helping Anna. Sloane will be glad to do her a favor and they will share a “moment.” Anna will have to come up with a cover story – will they just plant a gun on Carlos? Likely he already had one on him!

Meanwhile, Sabrina Santiago (Teresa Castillo) is worried about her ex Carlos even though she’s the one who ratted his location to the cops. Michael Quartermaine (Chad Duell) stops by for their date but Sabrina is too anxious to go out for a night on the town. Sabrina will open up to Michael about her past back in Puerto Rico and with Carlos. Michael and Sabrina decide to stay in and things heat up between them. Will Sabrina get bad news about Carlos that ruins their romantic moment?

Jake Doe (Billy Miller) is brooding with Sam Morgan (Kelly Monaco) at the hospital waiting to hear if Hayden Barnes (Rebecca Budig) will pull through surgery. Jake is worried that if Hayden dies, his chance to find out who he is will be lost – also Jake is still feeling guilty that Hayden took a bullet meant for him. Jake is frustrated and wants to know who he is and is increasingly frustrated at being put in danger by Sloane. Jake will push to get out of his CI deal at all costs.

Meanwhile, neither Liz Webber (Rebecca Herbst) or Patrick Drake (Jason Thompson) are happy to see Sam and Jason together. Patrick is jealous in general but Liz is jealous very specifically. After all, she’s watching her lover sit next to his wife and Liz knows she’s all kinds of wrong for keeping this secret from them. Likely Hayden will pull through, but Nikolas Cassadine (Tyler Christopher) will move in to shut her down before she blabs.

And there’s “General Hospital” gossip swirling that Monica Quartermaine (Leslie Charleson) will run into Jake at GH. Will this be the day Jake’s adoptive mom finally runs into him? And, if so, will she see her son in Jake?

Also going on at the hospital is Olivia Falconeri (Lisa LoCicero) and Ned Ashton’s (Wally Kurth) dead baby deception plan. Her son Dante Falconeri (Dominic Zamprogna) will stop by and she’ll tell him about her plans. Any chance the cop in Dante will override his urge to protect his mom and baby brother? Nah. Olivia will take the baby and run!

Also, in news of people we haven’t seen in a while. Kiki Jerome (Hayley Erin) and Morgan Corinthos (Bryan Craig) will have a blowout about their recent antics. They may still be worried that Michael will hold them accountable for their actions and they still have to wonder how baby Avery ended up at the apartment where they found her. Kiki will remind Morgan that her uncle Julian Jerome (William deVry) knows the truth.

Julian comes home upset about losing his son and will find someone in his house. He’ll pull a gun, but he won’t need it. This is a visitor to Port Charles who, according to “General Hospital” rumors, will shake things up for a lot of people in town. Here’s two possibilities to consider. One, it could be Lily Rivera (Lilly Melgar) looking for her half-brother Carlos. Or two, it could be another back-from-the-dead possibility: Julian’s sister Ava Jerome (Maura West)! Since Silas Clay (Michael Easton) saved her using baby Avery’s stem cells, she’s got to show up soon. That would shake things up, for sure!