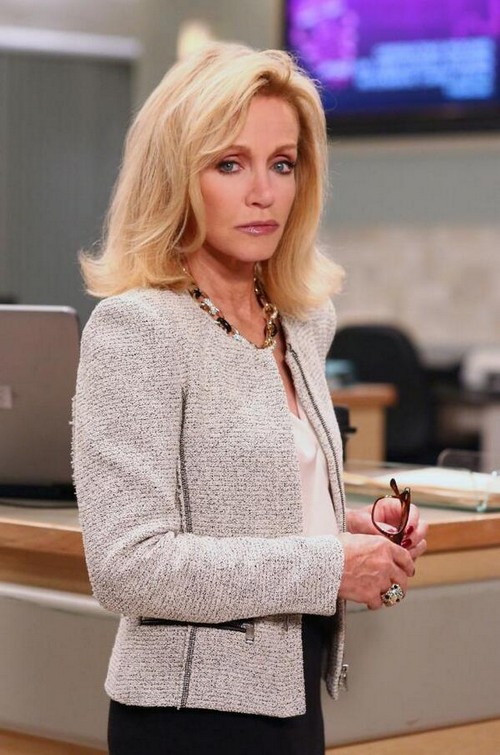 Characters are always coming and going in Port Charles on ABC’s popular soap opera General Hospital. But, when Knots Landing alum Donna Mills arrived as Madeline Reeves (formerly known as Magda), she really threw the residents of PC and GH fans at home for a loop. General Hospital spoilers teased that Donna Mills’ character would have a pivotal storyline on the soap, but we were still shocked when the truth about her character was revealed.

Madeline Reeves arrived on General Hospital as the mother of Silas Clay’s comatose wife Nina. It was shortly revealed that she was also the mother of Port Charles’ Detective Nathan West. That reveal alone was insane, and then she dropped a bomb on everyone and announced that Nina was pregnant with Silas’ baby so she drugged her in an attempt to kill the baby and accidentally put her own daughter in a coma and eventually killed her. Just when we thought Madeline had shared every possible secret, it was revealed that she was the long-lost sister of Dr. Liesl Obrecht, and actually was Nathan’s Aunt, and the son she raised as her own was actually Obrecht’s son.

As you can see Mill’s character Madeline had a huge impact on General Hospital, but we feared she would only be around for a short period of time and her character exited the soap on May 1st – and there was talk that Mills wasn’t happy with her treatment on GH. However, according to the May 26th edition of ABC Soaps, TPTB at General Hospital have come to an agreement with Mills and she will be returning to the series as Madeline. So, fans of the soap opera will finally get some answers to the many questions we have surrounding the mysterious character.

Mills told ABC Soaps, “Yes, it’s going to happen! This is hard! I can do it if it’s only a certain amount of days and a certain amount of scenes, because they do so much in one day. It can get a little overwhelming. But, they agreed to that, so yea, I think we are going to go forward. They really want to play out this story…”

So General Hospital fans, are you pumped to hear that Donna Mills is returning as Madeline Reeves? Right before she left revealed that her daughter Nina Clay is actually still very much alive (and we learned that she will be played by Y&R alum Michelle Stafford), where do you think Madeline has Nina hidden? If you connect the dots, there appears to be a good chance GH fans will get to see some fiery scenes between Mills and Stafford!

Fans on Soap Opera Spy are delighted and anticipating this match-up on the set of GH – hopefully Donna will be able to handle the reduced pace this time around:

Donna Mills&Michelle Stafford on the same stage is beyond awesome! GH will have a female version of Y&R’s Victor & Adam! Gotta love it!

even i know that most soap stars go thru 40 to 60 pages of script everyday – donna mills should have never signed if she wasn’t up for it – soap stars are the hardest working actors out there…………………….smh

Are you looking forward to seeing Nina confront her mom? The sparks will by flying soon enough!