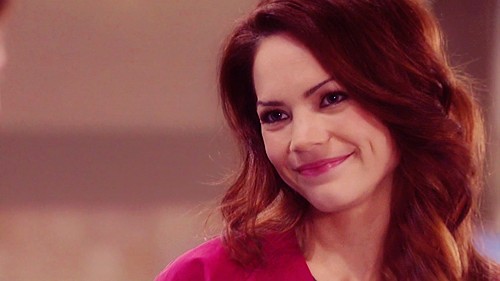 “General Hospital” spoilers reveal that the big fat lie Liz Webber (Rebecca Herbst) has been keeping about Jake Doe’s (Billy Miller) identity as Jason Morgan is about to blow up in her smug little face. Here’s what’s about to go down. Hayden Barnes (Rebecca Budig) was shot in the head to keep the secret but some time after July 4, the real fireworks will start in Port Charles when she wakes up.

Patrick Drake (Jason Thompson) notices an improvement and expects Hayden to wake. Is Liz so far gone on the dark side that she would tell Nikolas Cassadine (Tyler Christopher) about the status update to warn him? Liz doesn’t know that Nik paid to have her killed, but she definitely knows he’s going darker and much more Cassadine. There are a few ways this can play out.

First and absolutely, Nikolas will not be able to shut Hayden up. The truth will come out but will Liz reveal the truth to Jake before Hayden spills? Nope! “General Hospital” spoilers indicate that Jake will find out – either from enough memories and clues – or direct from his fake wife Hayden’s mouth that he’s really Jason Quartermaine.

And Jason may have had brain damage, but Jake is very clear headed. He’ll put his investigative skills to work to figure out what it means that he’s really a Quartermaine and will wonder who knows who he is. Jake may lay traps to find out who knows his secret so he can figure out who he can trust. Jake likely won’t expect Liz at first, but it will become clear that she’s been keeping the truth from her.

No matter the affection Jake feels for Liz, he will not be able to live with the fact that she kept him from his wife Sam Morgan (Kelly Monaco) and son Danny. Jake will dump Liz and this will present a great opportunity for GH showrunners and writers to finally make her character more interesting. Let’s face it, Liz has been kind of boring for a while. This lie is the first interesting thing she’s done in a while.

Remember, Liz at one point had Lucky Spencer (Jonathan Jackson) on the hook and was cheating on him and then had that thing with Nikolas. Before that, Liz was just a ho-hum good girl until her rape drove her over the edge. That storyline with her recovery and all that it brought up with Lucky for his dad’s rape of his mom was good writing and from there, Liz became more complex.

But now she’s back to being miss goody two shoes nurse. Yawn! Fingers crossed that Jake dumping her will drive her over the edge and into darkness. Let’s hope she gets re-entangled with Nikolas and the two start plotting major revenge shenanigans on the Quartermaines and all of Port Charles. The truth about Jake’s identity is an opportunity to shake things up in a major way.

Jake and Sam could reunite or Sam could choose to stay with Patrick since they’re all lovey dovey now. Jake could accept splitting with Sam and could be on the market – lots of ladies would love to get their hands on the hotness of Jason Quartermaine. Hayden should stick around to stir up trouble and Nik and Liz must face the wrath of everyone who cares about Jason. Fun!

What do you hope happens with Jason, Sam, Hayden, Liz and Nik once the truth comes out? Share your thoughts in the comments below. Be sure to check out CDL daily for more “General Hospital” spoilers, news and gossip