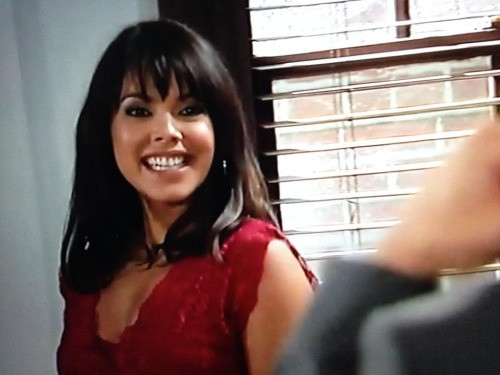 Here’s “General Hospital” spoilers about Rosalie Martinez (Linda Elena Tovar) who is right in the middle of the mess with Nikolas Cassadine (Tyler Christopher) and his coup over at ELQ. First, Rosalie doesn’t have just one secret – she has a history of secrets and lies wound around her. This whole issue with who and what Rosalie is has been going on since 2014 at Crichton Clark Clinic.

We met Rosalie as Nina Clay’s (Michelle Stafford) nurse – except we eventually found out Rosalie was not a nurse at all. She helped Nina fake that she still needed the wheelchair after coming out of her 20 year coma and abetted Nina when she drugged her ex Silas Clay (Michael Easton). Rosalie was also sketchy with the cops about Rafe then later when Michael Quartermaine (Chad Duell) shot Kobe.

What we do know is that both Nina and Nikolas know Rosalie’s “big” secret – and likely that Helena Cassadine (Constance Towers) does as well since Rosalie worked for Helena before she worked for her grandson Prince Nik. Some fans and “General Hospital” rumors have theorized that Rosalie’s big secret is that she’s a secret Cassadine, but that’s extremely unlikely.

If Rosalie was a closet Cassadine, who would care? And if she was family, would Nikolas be using Rosalie and giving her hell the way he has been? Sure Helena would, since she has no issue abusing family, but Nik isn’t that bad. One Cassadine theory is that Rosalie could be the daughter of Katherine Bell and Stefan Cassadine.

That would make her the never before seen Kailey Cassadine, but that would be pointless and uninteresting – Port Charles doesn’t need more Cassadines and the abuse of Rosalie by Nik wouldn’t make sense as Nik has fond feelings for Stefan. No matter which Cassadine could potentially have fathered her, Rosalie is not a closet Cassadine, that’s almost a certainty.

What’s far more plausible is that she’s a closet Corinthos. Rosalie is the right age to be the never before seen child of Lily Rivera and Sonny Corinthos (Maurice Benard). Lily was pregnant when she “died” in the car bomb meant for Sonny (shades of Godfather, right?) but that doesn’t mean she’s really dead. And if Rosalie is in town plotting against Sonny somehow, she would want to keep it a secret.

But would Rosalie have tried to bed Morgan Corinthos (Bryan Craig)? Ultimately, she didn’t so it’s still plausible. Another theory is that Rosalie is a secret Quartermaine. She’s the right age to be an offspring to Ned Ashton (Wally Kurth) or the late great Alan Quartermaine. Heck, they could even say that Edward sired her – he’s been known to have a child (or two) out of wedlock. But with Rosalie’s exotic looks, Corinthos makes more sense.

Unless… and here’s an interesting thought.

Maybe she’s an Alcazar! She could be the offspring of another mob family formerly from Port Charles and may be related to Lily, but not the child of Lily. Rosalie could want her identity secret to protect her from the Corinthos and Jerome crime families. A mob tie-in makes the most sense because there are other “General Hospital” rumors swirling of a new mob interest to absorb the vacuum left by the Jeromes.

Nik has been threatening Rosalie with letting her big dirty secret loose if she doesn’t recant what she said about him being involved in corporate spying to get the ELQ shares he’s obtained. But faced with jail otherwise, Rosalie may have no choice and it may be just a few episodes before Rosalie’s dirty laundry is revealed to all, no matter how bad she wants to keep it hidden.

So what do you think, who is Rosalie Martinez really? Cassadine? Quartermaine? Corinthos? Alcazar? Other? Who do you hope she is and what would you like to see her do in Port Charles once she’s out from under the threat of blackmail? Share your thoughts in the comments below. And be sure to come back to CDL often for more “General Hospital” spoilers, casting news and hot gossip.