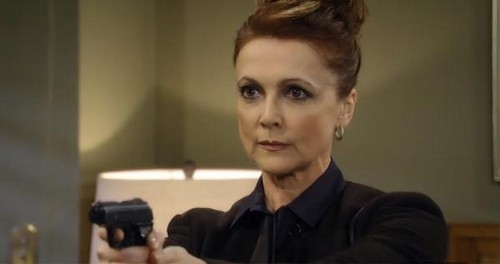 Monday’s episode left us with more questions than answers – here are some “General Hospital” spoilers for the Tuesday, June 30 episode. Ava Jerome (Maura West) wants to see her daughter/niece. She calls up Michael Quartermaine (Chad Duell) to ask to see baby Avery then gets the surprise news that Mikey handed his baby sister back to Sonny Corinthos (Maurice Benard). If Ava/Denise was smart, she’d stay the heck away from Sonny, but she wants to see her daughter too badly.

Ava will head over to mob central to get some face time with baby Avery and Sonny will let her see his little girl, but he’s going to watch Denise DeMuccio very closely since he’s absolutely sure that she’s really Ava and doesn’t put any faith in the DNA results. Sonny will warn her away from Morgan Corinthos (Bryan Craig) though, but his warnings are going to fall on deaf ears all around.

Up in Canada, Luke Spencer (Anthony Geary) comforts Holly Sutton (Emma Sams) when she tells him their son Ethan Lovett (Nathan Parsons) is also missing but that’s just too much for Laura Spencer (Genie Francis) to take. Laura snaps and confronts the elephant in the room – Holly and Luke’s cheating while Laura was married to Luke that resulted in Ethan’s birth. Cat fight – meowch!

They also find out that the kidnapper is someone they all know and yet another blast from Luke’s past. Luke and Laura will be sent a photo from the kidnappers. “General Hospital” rumors are swirling that it’s another Smith family mob member, but who knows? It could still turn out to be Helena Cassadine (Constance Towers). We haven’t seen her in a while and she loves to kidnap Spencers.

And speaking of cheating, Dante Falconeri (Dominic Zamprogna) heads over to Casa Corinthos to tell his dad Sonny that he’s pretty sure wife Lulu Spencer (Emme Rylan) is cheating on him with Dillon Quartermaine (Robert Palmer Watkins). Dante will be surprised to see baby Avery there and Sonny will be a good sounding board and will warn Dante against doing anything rash.

Dante feels a bit guilty about assuming the worst about Lulu, but he can’t stop himself from obsessing about her doing the nasty with the Q kid. Lulu freaks out again about lying to Dante and Dillon endures yet another tantrum from her, but they’re staying in Canada to help find Lulu’s brothers. Dante will rail more to Valerie Spencer (Brytni Sarpi) and they will grow closer even though they’re not getting jiggy – yet.

Nikolas Cassadine (Tyler Christopher), now outed as the biggest douche bag in Port Charles, is absolutely shameless. He runs into Jake Doe (Billy Miller) and Liz Webber (Rebecca Herbst) at Ruby’s eating lunch. Nik tells Jake that just because Mikey is out as CEO that doesn’t mean Jake has to be out as the security chief. Jake is not happy to see Nik and lays into him.

Jake tells him to take his job and shove it, he’s staying loyal to Mikey. Liz has to bite her lip. She can’t really take Jake’s side too vocally since she’s secretly siding with the evil Prince Nikolas. Nik will give her some heavy looks. Nik will not be happy that Jake will be out from under his thumb and hanging with Mike, the guy who may help Jake recover his identity as Jason.

There’s more Franco (Roger Howarth), Nina Clay (Michelle Stafford), Denise and Morgan antics coming this week too. Everyone’s trying to make everyone else jealous and it’s working. Denise and Morgan will quickly get into a compromising position but Nina will ignore her obvious feelings for Franco and try to focus on her hideous husband Ric Lansing (Rick Hearst). Boo hiss!

Don’t miss a moment of your favorite ABC soap then head back to CDL ont eh daily for tons more “General Hospital” spoilers, gossip and news.