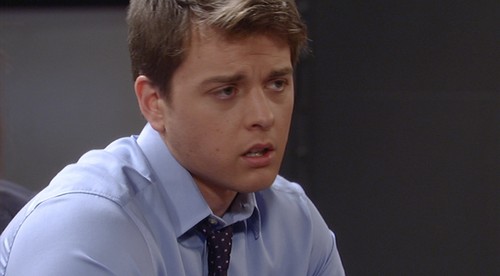 Get ready for fireworks in Port Charles this week – here are some hot “General Hospital” spoilers for the week of June 29 through July 3. Lots more kids coming to the Corinthos household this week. TJ Ashford (Tequan Richmond) has moved in even though mom Jordan Ashford (Vinessa Antoine) doesn’t approve of Sonny Corinthos (Maurice Benard). Michael Quartermaine (Chad Duell) will stop by to hand back baby Avery and make up with Sonny which will make the family almost complete. “General Hospital” casting rumors have been floated that Kristina Corinthos will be recast and will head back to Port Charles too!

Other than losing ELQ, things are going well for Michael. This week, Mikey and Sabrina Santiago (Teresa Castillo) will heat things up and get more sexy and serious. Plus, Jake Doe (Billy Miller) will turn down Nikolas Cassadine’s (Tyler Christopher) job offer to stay on as head of security at ELQ. Jake feels a pull to be loyal to Michael and will pledge to the ousted CEO that he will help him take down Nik and get back ELQ.

Sam Morgan (Kelly Monaco) will confront Nik again and tell him he’s acting like a real Cassadine. She will also team up with Jake and Mikey to take down Nik. Neither Liz Webber (Rebecca Herbst) nor Nik will be happy about this. Nik wanted Jake at ELQ under his thumb but it’s not working out for him. While things are going better for Mikey, Morgan Corinthos (Bryan Craig) is in trouble – yet again.

Morgan and Denise DeMuccio (Maura West) can’t deny their attraction for each other and will get way too intimate this week even though Denise tried to fight it by using Franco (Roger Howarth) as a distraction. Franco and Denise spark up a fake romance to show up Nina Clay (Michelle Stafford) and Morgan, but will end up plotting together instead.

Up in Canada, Lulu Spencer (Emme Rylan) is upset at lying to Dante Falconeri (Dominic Zamprogna) who is so jealous he locks lips with Valerie Spencer (Brytni Sarpi) then later tells Val there is something growing between the two of them. Maxie Jones (Kirsten Storms) butts in, sees Valerie there then goes home to complain to Nathan West (Ryan Paevey). He wants her to focus on the fireworks – could he be planning to propose?

Luke Spencer (Anthony Geary) and Laura Spencer (Genie Francis) look for Lucky Spencer (Jonathan Jackson) but Holly Sutton (Emma Sams) finds them instead. Has her son with Luke, Ethan Lovett (Nathan Parsons) also been taken? Luke and Laura will see a photo from the kidnapper. Luke just wants this all to stop so he can go home and apologize to Tracy Quartermaine (Jane Elliot).

Denise will be shocked to find out Sonny has her daughter again and Franco learns about Denise’s dalliance with Morgan and doesn’t want Kiki Jerome (Hayley Erin) anywhere near him. But first, Franco shares some major PDA with Denise to make Nina Clay (Michelle Stafford) jealous so she packs on the PDA with rat hubby Ric Lansing (Rick Hearst) who just got it on with her mother Madeline Reeves (Donna Mills). Ick all around!

Spencer Cassadine (Nicolas Bechtel) has had enough of his dad Nik neglecting him while he tries to take over ELQ and will act out. Nik is not going to have one person in Port Charles that gives a damn about him if he keeps on showing his true Cassadine roots this way, particularly once the truth about Jake Doe’s identity comes out.

This week promises to be a busy and exciting one in Port Charles and next week Hayden Barnes (Rebecca Budig) may come out of her coma! Don’t miss a moment of your fave ABC soap then come back to CDL for tons more “General Hospital” spoilers, casting news, gossip and more.