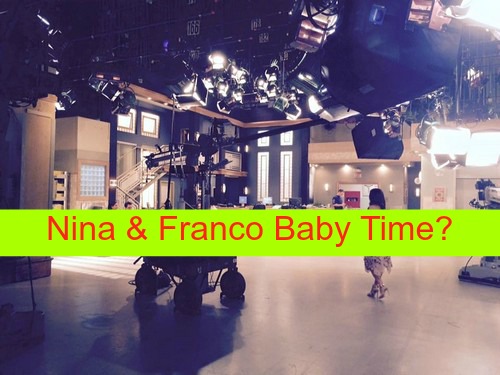 This “General Hospital” (GH) spoilers takes a look at the blossoming romance of Port Charles’ resident lunatics Franco (Roger Howarth) and Nina Clay (Michelle Stafford) and considers what’s next for them. Right now, Franco and Nina are playing house with Kiki Jerome (Hayley Erin) but is that enough for them?

Fans seem to like that Franco and Nina have settled down with Kiki, but not that they are doing it in Silas Clay’s (Michael Easton) death apartment. Maybe Kiki should let Nina redecorate after all.

The pressing question is how many bedrooms does that place have? And is there room for a nursery? Kiki made a snide remark the other day that Franco and Nina are sleeping in separate rooms and she obviously has a room too, so if we can get just get Franco and Nina in the same bedroom, there should be room for a baby.

Here’s what we think is coming for these two and the twists and turns we’re hoping the Nina and Franco story will take.

Kiki is acting in the role of child to Franco and Nina but is more of an annoying teenager than an adorable daughter. Although, to be fair, Franco still sees her as adorable. And Kiki is growing on Nina so much, in fact, that Kiki’s presence may reignite Nina’s biological clock that we know started ticking again after she woke up from that 20 year coma but has dimmed lately.

We also know from Nina’s recent revelation that she has only even been with Silas and it’s been decades since she’s had any monkey love.

Once Franco and Nina get done fumbling around – and if Kiki will stop interrupting – and finally make love, we think that Nina and Franco will be at it like bunnies. Franco is already a passionate guy and Nina has decades of going without love to make up for.

This should inevitably lead to a BABY! No doubt Nina assumes she’s too far gone to have a baby, but that is very likely not true. We have our fingers crossed for a little baby FraNina that would complete their happy little family.

It would be absolutely amazing to watch Nina and Franco go through the miracle of pregnancy and childbirth together. Franco has no kids of his own and was heartbroken when he found out that Kiki was not his biological child – after Ava Jerome (Maura West) came clean after years of lying to him.

But Nina may in fact have a child floating around – there have been continual “General Hospital” rumors that Madeline Reeves (Donna Mills) gave the child to someone to raise and Nina did not miscarry.

However, at present, Nina assumes she has no children – and she so desperately wants a child – we know this because she stole Avery after Ava gave birth. But if things go well with Franco, they can both have the family they want.

Nina has no parents now that her mom was shipped off to Pentonville and Franco’s mom is at Shadybrook. Plus he and his dad have more of a tentative relationship than a real and functional one. As a result, Franco and Nina have a lot of love to give each other and a child.

Poor Nina has been through so much and now that she’s found true love, we hope that she also gets the baby she wants. Heck, maybe Kiki can stick around and play big sister to the little FraNina offspring. And we know Scotty Baldwin (Kin Shriner) would be a fun grandpa.

Let’s hope the new writers give Nina the happy ending she deserves with Franco. Come back to CDL for more on Nina and Franco’s story as details emerge about future plot lines. What do you think? Would you like to see baby FraNina?

Be sure to check back with CDL for detailed daily “General Hospital” spoilers, casting news and more.