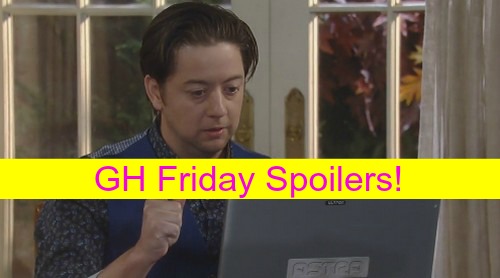 These “General Hospital” (GH) spoilers will get you psyched for the October 30 show. Halloween will bring frightening reveals in Port Charles. Paul Hornsby (Richard Burgi) is a pretty creepy guy anyway, but with that skull mask on, his outside looks much like his inside. Paul meets up with Anna Devane (Finola Hughes) on the pier and scares her.

Anna thinks she’ll still being haunted by Carlos Rivera (Jeffrey Vincent Parise). Little does she know that Paul is much worse than any Carlos specter could be. Paul lets Anna in on a bit of his game. Will Paul flat out tell Anna he knows she killed Carlos or just offer up some threats to shut up about the cremated body she’s going around saying is not Carlos? Anna has no idea what she’s in for…

And can we just say, when Paul grabbed Ava Jerome (Maura West) into that passionate kiss – YOWZA. At first he looked annoyed at her crying and then turned on. That’s just odd – but still steamy. Paul’s kiss sure lit a fire under Ava who dresses up baby Avery in a cute unicorn costume and knocks on what looks like Franco (Roger Howarth) and Nina Clay’s (Michelle Stafford) door.

Is Ava ready to persist with Kiki Jerome (Hayley Erin) and try and guilt Kiki into testifying for her by showing her how cute her sister looks and how happy she is with Ava? Franco and Kiki are hanging and Kiki looks sober for a change.

Speaking of people with secrets, Dante Falconeri (Dominic Zamprogna) has waited about 20 minutes too long to reveal his. Sonny Corinthos (Maurice Benard) told his son to come clean to wife Lulu Spencer (Emme Rylan) and Dante is all set to do it, but he can’t find Lulu at the Haunted Star.

Lulu is right where Dante doesn’t want her to be – with Dillon Quartermaine (Robert Palmer Watkins). Lulu is one mouse click away from seeing Valerie Spencer (Brytni Sarpi) telling Dillon that she and Dante did the deed. Looks like it might make it to the big screen before she sees it, though, so it will be a public confession.

Dante talks to Valerie at the party and Dillon doesn’t like the look of this. All this will blow up when intern Andy’s backstage footage plays for the investors. Looks like this party is all tricks and no treats for either Lulu or Dante. Also dealing with drama at the Haunted Star party is Sabrina Santiago (Teresa Castillo) who is getting grilled by her BFF Felix DuBois (Marc Samuel).

He suspects that Sabrina is keeping a secret about the baby and he’s right. Will Sabrina confess that her baby daddy is really Carlos? Molly Lansing Davis (Haley Pullos) thinks Julian Jerome (William deVry) is also keeping secrets.

Across Port Charles, there’s a much happier party going on elsewhere – over at The Floating Rib. Jake Doe (Billy Miller) got an ominous text that read “We’re coming for you.” Is it the Cassadines ready to cart him off?

Nah. It’s Carly Corinthos (Laura Wright) throwing the amnesiac a surprise bachelor party. Michael Quartermaine (Chad Duell) and crew are celebrating Jake’s presumed bachelorhood. Looks like Carly will get some info about Jake that will send her spiraling.

Did Damien Spinelli (Bradford Anderson) bring his laptop running the reconstruction program to the Rib and Carly catches a glimpse? Looks like Carly will find out something that will send her scrambling next week.

Liz Webber (Rebecca Herbst) is plowing ahead despite some pre-wedding jitters. Audrey Hardy (Rachel Ames) shows up and has a wedding gift for Liz that has her questioning her planned actions, but Liz will still keep on going, ignoring the bad she’s doing.

Don’t miss a moment of Friday’s show – it’s huge! And come back to CDL for “General Hospital” spoilers all weekend long for Monday’s show and all of next week plus MAJOR wedding spoilers.