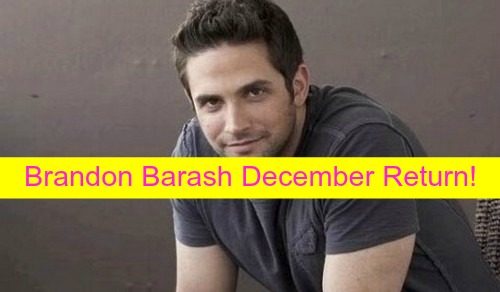 “General Hospital” (GH) spoilers are in, and Brandon Barash will be making a return to the ABC daytime drama. Johnny Zacchara will be headed back to Port Charles and is bound to stir up trouble with Sonny Corthinos [Maurice Benard] when he first appears in early December.

ABC Executive producer, Frank Valentini said in a statement, “We are so happy to have Brandon back with Johnny Z’s unexpected arrival in Port Charles that can only spell one thing; t-r-o-u-b-l-e.” Johnny was last seen on “General Hospital” when Maxie [Kirsten Storms] helped him get out of Port Charles to avoid the police arresting him on criminal charges in February of 2015.

Johnny Zacchara was a troubled teen and young adult. Luke Spencer helped him get out of prison by uncovering information that led the police to come to the conclusion that Johnny was coerced into confessing to killing his grandfather. Johnny has one clear enemy in Port Charles- Sonny Corthinos. The two men cannot stand each other, and his arrival could be trouble for the wheelchair-bound mobster.

Johnny and his partner Carlos Rivera [Jeffrey Vincent Parise] had a mission, and it was to ‘deal’ with Sonny and Julian [William DeVry]. On a snowy night, the mobsters were in a prison cargo van, and due to the storm slid off the road. It gave Johnny Z and his partner, Carlos Rivera the perfect opening to ‘deal’ with Sonny and Julian. Shots were fired from both sides, and Johnny was shot in the shoulder.

Carlos sought medical attention for Johnny, and he went to see Maxie for help. At first, she refused to help him out of the jam. Maxie expressed compassion and felt bad, but she didn’t want to get involved. She left her purse out in her living room, and Johnny took her keys and left town.

No one has seen or heard from the troubled mobster since February 10, 2015. His return means one thing – he could be working with Paul Hornsby and could be connected to Sonny’s shooting in some way. Are you excited about Johnny Zacchara’s return? Don’t forget to come back later for juicer “General Hospital” spoilers, news, and updates!