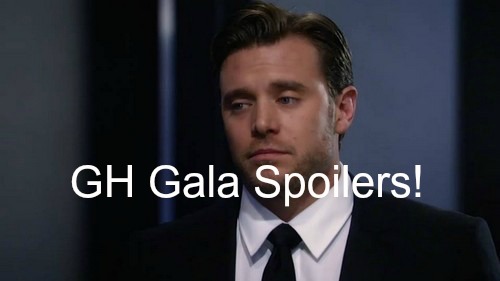 “General Hospital” (GH) spoilers indicate that Jason Morgan (Billy Miller) will rethink casting Liz Webber (Rebecca Herbst) aside when he sees her looking gorgeous at the Gala. It’s a good thing Jason doesn’t have his memories back, though.

If Jason realized that Liz’s Gala date Franco (Roger Howarth) was his ex-stalker and nemesis, he might go off the rails. Will Jason be jealous because he thinks Liz is on a real date and rebounding? Or will Liz make sure Jason knows it’s just a work colleague thing?

Also, you have to admit, Sam Morgan (Kelly Monaco) pales in comparison to Liz at that moment. Sam is in her leathers and shlubby clothes while Liz sparkles in an emerald gown. Liz may also look better in Jason’s eyes after Sam makes a long overdue confession to her hubby.

Inside the big event, Tracy Quartermaine (Jane Elliot) opens the gala. Paul Hornsby (Richard Burgi) is to be the keynote speaker. But Ava Jerome (Maura West) asks Paul about taking her to the Gala and, of course, he can’t.

This will make Ava jealous that Paul can be seen out with Tracy in public and Ava also suspects he’s shagging his ex. Will Paul miss his speech to offer Ava some sexual healing upstairs in a MetroCourt room? Or will the booty call wait until after the shindig?

GH rumors tease that someone will catch them shagging – will it be Tracy who followed Paul to see what he was up to? Or perhaps Mac Scorpio (John J York) who is still investigating Paul? Maybe it will be Morgan Corinthos (Bryan Craig) that walks in.

No matter who it is, it will send sparks flying. Will Maxie Jones (Kirsten Storms) get into it with Valerie Spencer (Brytni Sarpi) at the Gala? We know Maxie and Valerie are due for a showdown soon but Maxie will not come out of this the winner.

Can Carly tempt him to go by telling him that Jason is counting on him to be there? Or will this turn into another Carly-Sonny mega brawl and she’ll have to head back to the Gala without her mobster hubby? Maybe he’ll show up later to surprise her.

Monica sees right away that sonogram and pregnancy facts Michael has been told by Sabrina don’t align. Before the end of the Gala, Michael will demand that Sabrina come clean about who the father of her baby is – will he keep her secret or walk out?

Also, is Carlos Rivera (Jeffrey Vincent Parise) lurking nearby? He is sticking around Port Charles against Paul’s express orders to keep an eye on his baby mama. He must be lurking at the MetroCourt somewhere… Is he in costume?

Julian Jerome (William deVry) is plotting a proposal and wants the three daughters of Alexis Davis (Nancy Lee Grahn) to agree. Wonder if that will go well… Also, Liz will remind Jason she’s not the mastermind of his identity secret betrayal.

When Laura Spencer (Genie Francis) is chatting with Jason, Liz will reveal that Laura was part of the cover up. At some point in the Gala, Jason will snap and go after Nikolas Cassadine (Tyler Christopher) who will lose it and hit first. It’s a brawl at the ball!

Will he reveal that he sent Robin off to be executed? Did Robin’s guard let her get away or was she able to escape? What will the angry avengers due to Jerry? Will they lock him up so he can’t make more mischief? Are there any other shocking surprises lurking on Cassadine Island?

Don’t miss a moment of the cliffhanger episode on Friday, December 18 – then come back to CDL for more “General Hospital” spoilers, gossip and news.