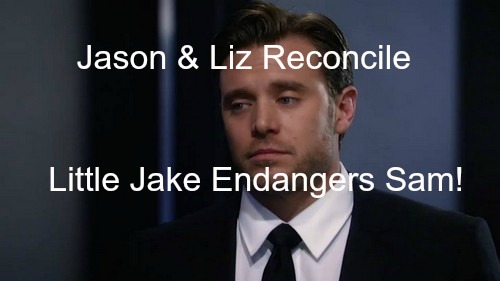 “General Hospital” (GH) spoilers reveal that Jason Morgan (Billy Miller) will soon reunite with Liz Webber (Rebecca Herbst) and when Sam Morgan (Kelly Monaco) starts meddling to break them up, her life may be in danger.

GH fans have been wondering when little Jake Spencer’s (James Nigbor) dark side will come out – and we’re about to see it in all its chilling glory. Little Jake will be thrilled that his parents are reconciled and they’re a happy family.

But when Sam starts plotting to destroy Liason, little Jake will snap and focus all his tiny wrathful vengeance on the woman he sees trying to destroy the only family he’s ever known. Hell hath no fury like an angry third grader…

If Jake was any ordinary elementary schooler, Sam might not have cause for concern. But when the little guy in question spent his formative years living (and possibly training) on Cassadine Island, that’s a whole different ball game.

We’ve seen little Jake get violent with Cameron Spencer (Michael Leone) when he scared him with a mask – that knee-jerk reaction sent his brother slamming into a bookshelf. So what damage could little Jake do intentionally?

What’s also interesting about little Jake coming after Sam is that big Jake Doe (as Jason was known until very recently) was ordered to kidnap (and later kill) Sam by Helena Cassadine (Constance Towers) when he was under her control.

Will little Jake finish the task that big Jake began? No doubt someone will intervene and save Sam, but it will be amazing to watch little Jake finally go off the rails and let out his “inner Cassadine.” Expect scary interactions. Sam will be shocked.

There’s no doubt about it – little Jake may be Liz and Jason’s son biologically – but Helena has spent more time with him in recent years and so has exercised far more influence that either of his bio-parents.

Little Jake threatening Sam for trying to split up his parents is also reminiscent of the time when Jason himself threatened to kill Sam for endangering Liz and her kids. (VIDEO BELOW) Clearly Sam won’t let Jason be with anyone else and that’s unacceptable behavior on her part.

The fact that Liz lied before is a moot point – Jason knows the truth about Liz now and will choose to be with her. That means Sam needs to butt out and let Jason live his life. But she can’t and won’t do that. We will soon see a return of the darker side of Sam.

She was a sunnier, sweeter creature when she was with Patrick Drake (Jason Thompson) but now that he dumped her and Jason turns back to Liz soon, we will see the old Sam that we know is capable of anything when it comes to her rivalry with Liz.

Whether you prefer Liason or JaSam, the bottom line is – it’s Jason’s choice – not Sam’s and not Liz’s. Those two are waiting with open arms, but he will choose Liz (at least for now) and Sam can’t live with it.

Not only will her antics put Sam in very real danger at the hands of tiny terrorist Jake but will also put her at risk of losing Jason for good. She could have bided her time and waited for Jason to decide Liz is not the woman for him and Sam is.

But Sam pushing Jason and tormenting Liz will only make him more protective of Liz – as we’ve seen in the past – and push Liz and Jason closer. Sam never learns from her mistakes and is about to make a whole host of them again.

So what do you think GH fans? What will little Jake do to Sam? LEGO car bomb? Cut her brake wire with his school safety scissors? Or will he pull out the big guns – literally a big gun – and kidnap her and lock her up somewhere?

Stay tuned to CDL for more on the Jason, Sam, Liz and the creepy little kid plus daily detailed “General Hospital” spoilers, gossip and news.