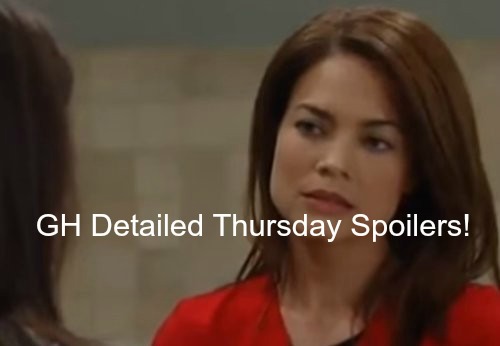 Liz blames Sam for breaking her and Jason up while Sam thinks it’s 100% Liz’s fault for lying. No doubt this will devolve into a she-said, she-said blame-off. Jason will have a tense discussion with both women which will turn into the most awkward three-way chat ever.

Remember the last time Jason, Liz and Sam were in the same room? Jason screamed at Sam and called her a liar and threw her out of his house. This talk won’t be so volatile but will not be comfortable for anyone. Carly Corinthos (Laura Wright) talks to Jason and encourages him to get to know himself.

Carly wants Jason to open himself up and socialize. This talk will later prompt Jason to agree to attend the holiday gala with the Qs which will thrill Monica Quartermaine (Leslie Charleson). Jason is torn on all fronts – he cares for Liz and has a distinct lack of feels for Sam.

Plus, he doesn’t want to be the guy he once was – Carly says he has to decide for himself what he wants to be, what life he wants – and who he wants in this new life. Jason’s talk with Liz and Sam may make a dent. GH spoilers indicate Jason will get back with Liz in coming weeks.

In the park, Maxie Jones (Kirsten Storms) meets up with Dillon Quartermaine (Robert Palmer Watkins) who has something for Maxie. He gives her an envelope – inside is some memento of Georgie whose death anniversary is today.

Maxie and Dillon share fond thoughts and memories of the girl they both loved and lost in a tender moment. The warm feelings won’t last long – Maxie is spoiling for a showdown with Valerie Spencer (Brytni Sarpi) but Valerie will give back as good as she gets and will unload on Maxie.

Nina Clay (Michelle Stafford) chats up Tracy Quartermaine (Jane Elliot) about the gala. Nina is angling for some Crimson publicity at the event with a big move. What does clever Nina have in mind? Julian Jerome (William deVry) won’t like this. Looks like Nina, Maxie and Dillon are destined for Crimson success.

Kristina Corinthos (Lexi Ainsworth) comes home from college and is warmly greeted by Molly Lansing (Haley Pullos). Little does Molly know that big sister Kristina is hiding a secret – was she kicked out of college? Did she drop out? Looks like Kristina may be back in Port Charles for good soon.

Also, Julian has a talk soon with Kristina, Molly and possibly Sam to tell them he wants to propose to Alexis Davis (Nancy Lee Grahn). We know Molly is NOT a fan of Julian’s, but even if she doesn’t like it, Julian will put a ring on it – maybe at the Gala.

Patrick Drake (Jason Thompson) now knows the Cassadines are involved in Robin Scorpio’s (Kimberly McCullough) disappearance and the cavalry shows up in the form of Anna Devane (Finola Hughes) and Robert Scorpio (Tristan Rogers). December 17 is Robert’s first day back on GH.

Meanwhile, time is running out for Robin. Jerry Jacks (Sebastian Roche) has issued a kill order but will the sympathetic guard give Robin a chance to escape? Will the Scorpio-Drakes find the compound only to discover that Robin has rescued herself?

GH spoilers reveal a furious Patrick slamming Jerry into a wall and demanding to know where Robin is. We also know that Robin will be back in Port Charles for Christmas before she and Patrick exit the scene as Jason Thompson leaves “General Hospital” to make the leap to “The Young and the Restless.”

Don’t miss a moment of the Thursday, December 17 episode as we ramp up to the big holiday Nutcracker Gala and other exciting events. Watch then come back to CDL for more “General Hospital” spoilers, gossip and news.