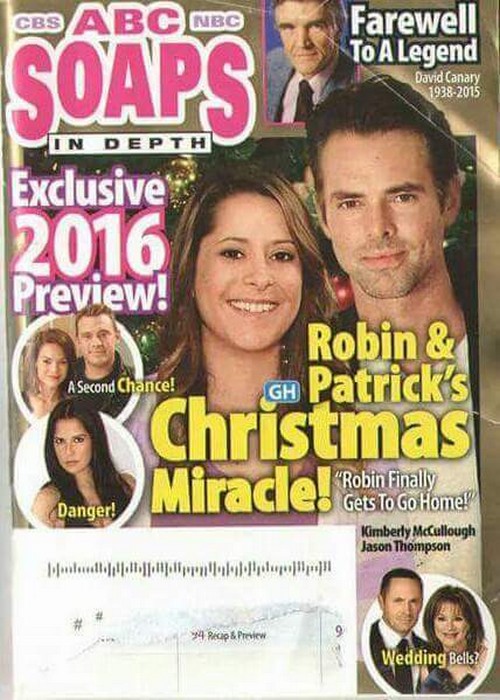 As CDL has been reporting for many weeks, Jason will not be able to walk away from the powerful love that he shares with Liz. And now ABC Soaps in Depth 2016 preview issue confirms CDL’s reports that Jason and Liz are far from over.

Jason recently went back to the house he shared with Liz and gave her hope that he was back to stay. He wasn’t. Jason was simply back to pack up – but if you’re a Liason fan, don’t let that incident deter you from hope for the super-couple.

The question is – when will Jason return to Liz? Obviously, she’s left the door open to him, but when will he come knocking? Likely we could see a revival of Jason and Liz around Christmas or New Year’s. Once Jason has some time to ponder life alone without Liz, he’ll miss her.

Sure she lied, but it all worked out for him. And Sam lied too (many times). Plus, by December 18, Sam will have confessed some of her misdeeds to Jason. We have to remember that Jason doesn’t know that Sam hired thugs to scare Liz and the kids and put his son Jake Spencer (James Nigbor) at risk.

Jason knows what Liz has done – but he has no idea what depths Sam has sunk to. At least Liz has never done anything to put Liz or Danny in physical danger. If Jason remembers what Sam did that caused him to threaten to kill her, he may change his attitude.

And, most importantly, Jason loves Liz – he doesn’t love Sam. Even when Sam tried to kiss him, he rejected her despite knowing that she was his wife. Also, in coming days, Jason will have to reconcile whether he wants to go back to the man he was or carve out a new path.

This Jason hates the violence he’s so capable of and doesn’t want to be a thug. Sam is the perfect moll for that bad boy, but she’s not the right girl for the Jason Quartermaine he used to be – and that it seems like he is once again.

When Jason gives Liz another try, the Qs can likely move past her lies because, heaven knows, that house is full of inveterate fibbers. If Jason stops by to see little Jake and Liz’s other boys on Christmas, the kids may ask him to stay.

And Jason may realize that’s exactly where he feels at home. After all, the life with Liz is the only life he knows and that counts for a lot. Christmas with the boys would mean a lot to Jason and he could begin to soften him towards Liz.

The bottom line is, within a week or two, Jason will likely be back with Liz. The problem is, will Sam then show her true colors and start stirring up trouble again – despite Jason having made it clear what he wants? There’s still so much more to come with the Sam-Jason-Liz story.

As the Nutcracker gala cranks up, we’ll see a tense conversation between the three of them then Jason loses it – possibly over Liz – and Nikolas Cassadine (Tyler Christopher) will assault Jason at the gala. Look for weeks (and perhaps months) more of drama in this storyline.