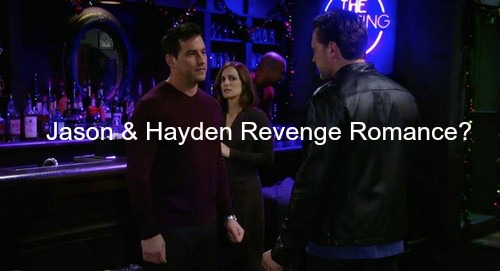 “General Hospital” (GH) spoilers indicate that Jason Morgan (Billy Miller) may head off in an unexpected direction once he grows too frustrated by Sam Morgan (Kelly Monaco) and Liz Webber (Rebecca Herbst) playing tug of war with his emotions.

Let’s face it, Liz did a lot of lying, but Sam is no innocent in all of this. If she really wanted Jason to be happy, Sam would have left Jason with Liz since she knows he really loved her rival and was with his son Jake Spencer (James Nigbor).

After the reveal, Jason also knew about Danny Morgan and could have married Liz, raised both Jake and Danny, and been a friendly co-parent with Sam. But no, Sam couldn’t let Jason be happy if his happiness was tethered to Liz.

So Sam blew up Jason’s life completely under the guise that he “needed to know” that Liz was lying. No, he didn’t. Sam was just miserable that she lost Jason to Liz and wanted to ruin that relationship with no thought to how it would affect Jason’s fragile mental state.

And, of course, Liz was prepared to keep him from his children if the identity truth never came out, so she’s 100% horrible in this too. Both Sam and Liz are being spiteful and fighting over Jason like he’s a prize to be won. This is not lost on Jason.

He knows why Sam did what she did – not to give him information that he needed, but to wreck Liz’s life. Jason isn’t dumb. Jason also knows why Liz told her lies – to keep him with her and away from Sam and Danny.

Both women are guilty as hell of hurting Jason in the last few weeks – and for years before that. And finally, Nikolas Cassadine (Tyler Christopher) was keeping Jason’s identity secret to steal the Q’s family business, so he was being self-serving as well.

What more perfect revenge on all three of them – Sam, Liz and Nikolas – if Jason took up with Hayden Barnes (Rebecca Budig)? Out of all of these people, Hayden has actually done the LEAST harm to Jason. Once Hayden finds out Nik tried to kill her, all bets are off with their relationship.

Jason feels guilty that Hayden was shot, ostensibly in a botched assassination attempt on his life. If he finds out Nikolas tried to shoot her to keep her from telling him the truth, Jason could develop protective feelings towards Hayden.

And that could lead to some sparks – those two already had chemistry back when she was pretending to be his wife. The best thing about Hayden is that she belonged to Nikolas so taking her from the Prince would be sweet revenge.

And Hayden has no past with Jason which makes her easier to be with than either Sam or Liz. Plus, by being with Sam or Liz, the other will be hurt and likely scheming to tear apart his relationship. Why would Jason want to live like that?

The fact is, choosing Sam or Liz either one guarantees him a life of conflict – he can’t cut either out of his life because they are both his baby mamas, but he can call it off with both and tell them they did this by scheming against each other and only have themselves to blame.

It seems like the only person out of Sam-Liz-Jason that deserves a happy ending at this point is Jason – and Hayden seems like the right kind of gal for him. She’s spunky, unafraid, has no kids but likes kids, is adventurous and not scared off by a bad boy.

Whether Jason took a position at ELQ or went back to work for Sonny Corinthos (Maurice Benard), Hayden could deal with it. She’d be a perfect corporate wife or mob moll. She’s smart, beautiful, and sexy – and will also be looking for revenge.

What do you think GH fans? Would you like to see Jason walk away from both Liz and Sam and find new love? And would Hayden be a good choice since it would hurt Nikolas? Share your comments below and be sure to check back with CDL for daily “General Hospital” spoilers, gossip and news.