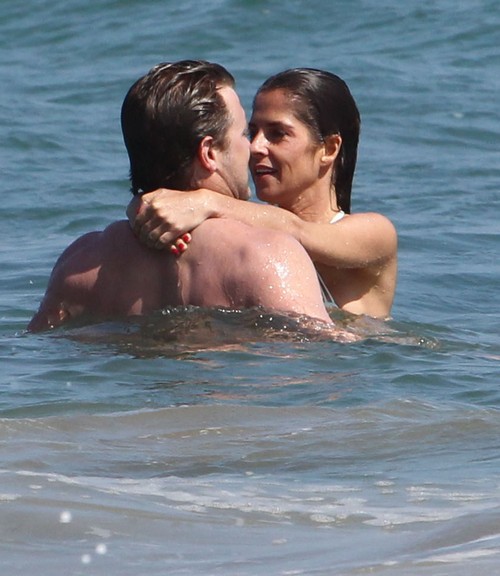 Everyone wanted Sam Morgan (Kelly Monaco) and Jake Doe (Billy Miller) together and now they are – just not in Port Charles. “General Hospital” spoilers indicate Jake and Sam will find out they can be together on-screen soon but off-screen as well, the two stars are already hooking up. Recent photos from the July 4th weekend show Billy and Kelly frolicking in the ocean in Malibu together. And they weren’t just surfing as buddies! They were cuddling. Kelly had her arms around Billy and they were holding each other, laughing and smiling. Looked like a fun day out between a loving couple.

What is undeniable on-screen chemistry between Kelly and Billy/Sam and Jake has translated into real life romance and they certainly deserve this slice of happiness. Kelly was in a relationship for 18 freaking years with her high school boyfriend Mike Gonzalez who treated her like crap and cheated on her. Kelly had been with him since she was 15 and he was 18 and Mike was apparently doing her wrong from the get go. The guy did not have much going on and just seemed to latch onto Kelly when she was young and damaged her self-esteem for sport.

After they FINALLY split, Kelly briefly dated another almost-nobody Heath Freeman, an “actor” who has done some things here and there, but not much else. It’s a mystery why Kelly has always taken up with men that are not in her stratosphere. But this time, looks like she may have landed a keeper. Billy Miller is a not only hot, has an impressive resume and career of his own, but rumor has it he’s a genuinely nice guy. He launched a Go Fund Me to help his handicapped niece Savannah and her archery team go to a national competition. He’s said in an interview how crazy he is about the kid.

In other sign that Kelly and Billy are simpatico, Kelly has been heavily promoting this cause in her Twitter feed. Kelly is notoriously private about her private life – that’s why few people ever saw her long-time loser BF in photos. And Billy Miller himself has no Twitter or Facebook page. This sweet guy seems to be private as well and is not part of the selfie generation. He lives with his bulldog, reads a lot, digs movies and, unlike most actors, has a college degree. He attended University of Texas (and, sigh, he’s a Southern boy…)

This relationship explains a lot. We wrote before how the sex scene between Billy and costar Rebecca Herbst (Liz Webber) seemed to fall flat and lacked passion and now it makes sense. Billy was probably thinking about his other costar Kelly and didn’t want to get too jiggy in the scene – and maybe Kelly was in the wings watching. Who would want to look too enthusiastic making out with someone else when your hot new GF is monitoring the shoot?

Kudos to them – it would be really great if this romance took root and stayed real. Would love to see Kelly get her happily ever after, especially since she spent nearly two decades with a loser who didn’t even consider marrying her. Let’s keep our fingers crossed for a real-life Ja-Sam wedding – although, given how private these two are, we might not even know about it! Congratulations to Kelly and Billy – can’t wait to see your on-screen alter egos Jake and Sam together soon as well!

Check back with CDL often for tons more “General Hospital” spoilers, gossip and other news.

FameFlynet: ‘General Hospital’ actress Kelly Monaco showing off her bikini body while enjoying a day on the beach in Malibu, California on July 5, 2015. Kelly was seen hugging and getting close to a mystery guy while in the water – Billy Miller is that mystery guy!