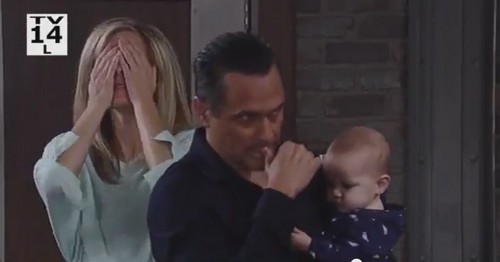 Finally baby Avery is found, but accusations over who is the kidnapper will boil over today – check out these “General Hospital” spoilers for the Tuesday April 28 episode. Dante Falconeri (Dominic Zamprogna), at Michael Quartermaine’s (Chad Duell) insistence, will show up at Silas Clay’s (Michael Easton) place to check and see if Kiki Jerome (Hayley Erin) and Morgan Corinthos (Bryan Craig) are guilty of kidnapping as well as drugging. Unfortunately, Carly Corinthos (Laura Wright), Sonny Corinthos (Maurice Benard), Kiki and Morgan are all there with Avery. This looks like a kidnapping conspiracy!

Even if they try to hide Avery, babies are loud and Dante will know his baby sister is there. The question is, how many of his relatives will he arrest for suspicion of kidnapping? Will he cart Morgan and Kiki off to jail? Will his dad Sonny be able to convince him to pretend he just randomly found Avery? Or will Silas show up in time to put a stop to it and admit he’s the real kidnapper? Also, Silas should face extra punishment for leaving Avery home totally alone – not cool for a doctor.

Now that evidence has surfaced exonerating Michael of being a bad influence on his baby sister, the judge should hand custody back to him. “General Hospital” spoilers indicate that, in their guilt over Morgan’s actions, Sonny won’t fight Michael over Avery’s custody (for now). Sonny and Carly will make Michael an offer. They’ll put the custody fight to bed as long as they’re allowed visitation. There will be a caveat that Morgan and Kiki are barred from seeing her based on their endangering Avery.

Sabrina Santiago (Teresa Castillo) will tell Felix DuBois (Marc Samuel) about the kiss with Michael and Felix wants to know if she’s into him. Of course, Carlos Rivera (Jeffrey Vincent Parise) and Sabrina will have a run in soon and there’s still some chemistry there, but who’s going to pick a criminal (even if he’s super hot) over a millionaire? (I would! Give me the scruffy Latin gangster over baby faced Michael any day, but hey, that’s just me…)

And poor, poor Franco (Roger Howarth). Dr Obrecht’s (Kathleen Gati) insinuations about Nina Clay (Michelle Stafford) really got to him and he goes digging in her purse. Nina will be hurt because she thinks Franco is trying to prove she’s a liar but, really, Franco just wants to protect her. With Nina’s brother Nathan West (Ryan Paevey) also doubting her, Nina may be pushed back into doing something crazy because no one seems to have faith in her stability.

Showrunner Ron Carlivati recently spoke about Nine and Franco’s relationship arc and said he’s interested to explore where they go from here. Can they love each other? Or are they too dysfunctional to truly love? Carlivati said, “They could be each other’s salvation – or they could be each other’s destruction.” Franco has already had so much heartache from Carly’s betrayal and I see Nina breaking his heart when she acts out. Is it wrong that I want a happy ending for the reformed serial killer?

Soon-to-be gone Ned Ashton (Wally Kurth) updates Michael on some ELQ biz. He’ll have to tell Michael that in addition to the missing shares last seen in Luke Spencer’s (Anthony Geary) hands, he just handed his 11% of ELQ over to Franco. Michael will snap, particularly since Ned was just raging at Michael and accused him of being irresponsible then tried to push Michael out as CEO. Ned will leave soon to help out daughter Brook Lynn (to cover for his move to Days of Our Lives).

Olivia Falconeri (Lisa LoCicero) will start having horrible stomach pains. She’ll worry that her baby is suffering because of her fibbing about paternity to Julian Jerome (William deVry). This will carry on through the end of the week when the Nurses Ball drama starts and the Ned-Olivia-Julian conflict will reach a culmination. Alexis Davis (Nancy Lee Grahn) is going to notice things are off and will push, but Alexis should be careful what she wishes for…

And Lulu Spencer (Emme Rylan) will seek out Nikolas Cassadine (Tyler Christopher) about him letting Valerie Spencer (Brytni Sarpi) stay at Wyndemere. Nik really can’t say no, but he also doesn’t want any more witnesses to his ELQ plotting. But since Nikolas also can’t afford to lose the shot at extra goodwill considering all of his shenanigans of late, he’ll have to say yes. Lulu will be relieved because she’s uncomfortable with how much Valerie seems to dig Dante.