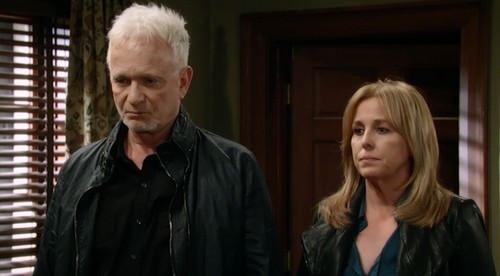 When “General Hospital” spoilers and casting news first revealed that Genie Francis was headed back to the ABC soap to revive her iconic role as Laura Spencer, fans of the Port Charles daytime drama were ecstatic.  Although, some of that excitement was short-lived when it was revealed that Genie’s return was only temporary and she had basically been resurrected just to help another iconic character, Luke Spencer, bid his adieus to “General Hospital.”

According to “General Hospital” spoilers, Anthony Geary’s final air date will be on Monday July 27 and that will coincidentally be Genie’s final air date as Laura Spencer as well.  However, Genie will be returning again in the fall and will participate in a brief storyline spanning from September – December, and then she will be leaving the ABC soap again for good.

There is good news though for “General Hospital” fans!  Spoilers in the latest edition of CBS Soaps In Depth reveal that Genie Francis has discussed returning to the ABC soap permanently with the producers and TPTB.  Genie dished to the soap opera magazine “I am very open to that [staying in Port Charles permanently].  I have been in Los Angeles the whole time my children have been in high-school.  Now I have an empty nest so I am even more interested in working.  I don’t want to sit home and not know what to do with myself.”

So, Genie Francis is totally on board with staying on “General Hospital,” now we just have to hope the producers and writers agree and can stir up some storyline for her once Luke Spencer officially exits.  It seems reasonable to keep Laura around after Luke leaves, because we can all agree there is going to be a huge void missing from the GH cast once Anthony Geary is gone.  Genie can’t replace Tony, but she can certainly make his absence a little more bearable for GH fans.  What do you guys think?  Would you like to see Genie Francis return to the soap opera permanently?  Let us know what you think in the comments below!