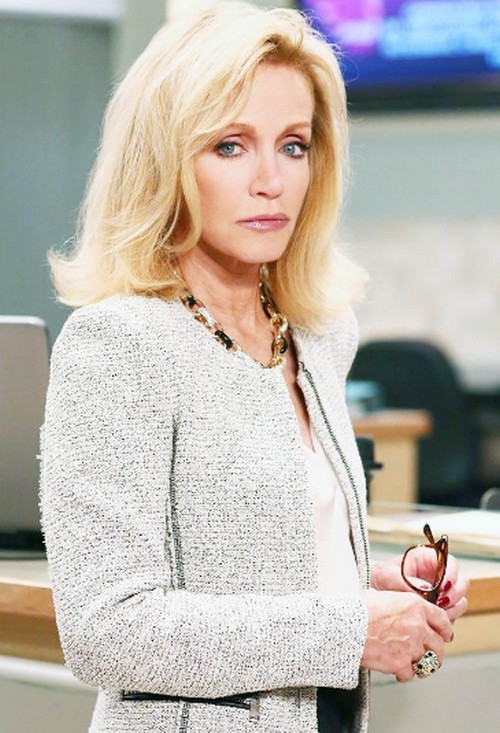 General Hospital spoilers explain why Donna Mills might be exiting the show on the heels of Ron Carlivati’s firing and how this makes her a prime suspect for Silas Clay’s murder. GH has lost some heavy hitters starting with Anthony Geary –  and from Geary’s scorching exit interview General Hospital viewers seem to have a clearer vision as to what was really going on behind the scenes at GH and none of it was good – which of course is reflected in the substandard ratings which ultimately caused Carlivati’s firing.

GH will be going through many huge changes in the next year so one big question is will Donna Mills who plays Nina Clay’s [Michelle Stafford] mother Madeline Reeves be exiting in Ron Carlivati’s wake? It is a well known fact that Ron Carlivati is the self professed number one fan of Ms. Mills and in an interview with Smashing Interview magazine she explains their relationship:

Melissa Parker (Smash Interview magazine): I hear that General Hospital’s head writer, Ron Carlivati, has been obsessed with you his entire life(laughs).

Melissa Parker: And that he patterned your character, Madeline Reeves, after Abby Cunningham (Knots Landing).

Donna Mills: I think Madeline’s got qualities that Abby doesn’t have and maybe goes a couple of steps further than Abby would ever go. But it’s a different medium. It’s a different way of thinking about characters than we had on Knots. Ron is so sweet. I love him. The first time I met him he was a wreck (laughs). And it was after I was on the show already. It was at the Daytime Emmys last year. He was just so funny. I really like him a lot.

Melissa Parker: Do you know how long you will recur on General Hospital?

Donna Mills: I do these arcs, and then I’m off for a little while. I come back and do an arc. They asked, “Do you like that? Does that work for you?” Actually it really does because it’s hard, and I wouldn’t like to be doing it all the time. It really works nicely. I can do it for several months or whatever, and then be off for a couple of months, and then be on again. I think it will probably continue like that.

From the looks of things the role of Madeline Reeves was “personal” on many levels a real life friendship with Carlivati and the fact that the character was made special for her which leads us to the next question – will Donna Mills be exiting after RC was fired? GH has recently lost two heavy hitters with Geary and Easton – will Mills be the next ?

Mills character debuted in March 2014 Mills and won the Daytime Emmy Award for Outstanding Special Guest Performer in a Drama Series. Madeline Reeves is connected to several residents in PC, daughter Nina Clay, her sister is the other town Villainess Dr. Liesl Obrecht (Kathleen Gati) – Madeline has a son Detective Nathan West [Ryan Paevy] (Liesl’s son but Madeline raised him as her own) and she was the mother in law to the latest casualty Dr. Silas Clay (Michael Easton).

Madeline Reeves’s character is involved with town villain Ric Lansing (Rick Hearst) if TPTB wrote her character off would they pin Silas’s murder on her or would they just have her take Nina’s money and run? There are two murderers in the running: Ava Jerome (Maura West) and Madeline Reeves – both being capable of stabbing someone in the back.

Ava/Denise needs to keep her identity and her affair with her daughter Kiki’s (Hayley Erin) boyfriend Morgan Corinthos (Bryan Craig) a secret. Madeline needs to make sure Nina stays in the nuthouse and if Silas had told anyone Nina wasn’t the one who kidnapped baby Avery and it was him in fact it could mess up her plans to get her greedy paws on Nina’s money. Ava is motivated by desperation but Madeline is motivated by pure greed.

In the end it looks like it will be the battle of wicked blondes – the question is which one is more ruthless and which is the next General Hospital casualty? Please leave your thought and comments in the CDL comments below