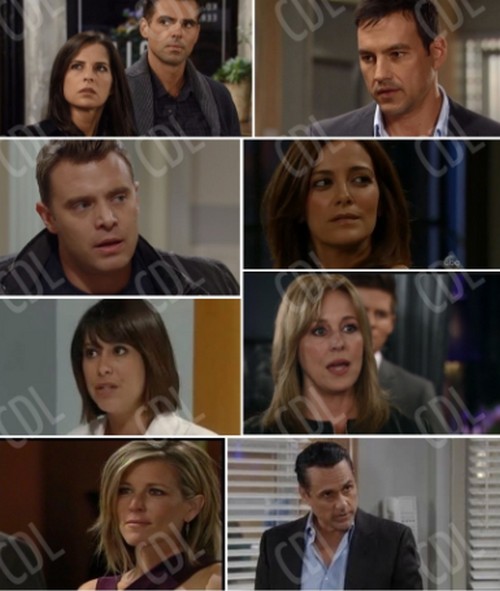 General Hospital spoilers have a wild and crazy marriage proposal and wedding disaster in store for GH fans! This week General Hospital promises to have a surprise proposal, well maybe not so much a surprise to the viewers, BUT it will be a surprise to Sam Morgan (Kelly Monaco). Patrick (Jason Thompson) is starting to show a side that is a very unattractive green eyed monster.

As Sam and Jake (Billy Miller) get closer while working on trying to find out who he really is, Patrick notices the dynamic between the two – unbeknownst to him, Sam has been sleuthing with her own husband! Patrick’s insecurity shows this week when he decides it’s time to step it up and put a ring on it – as if that is going to stop the undeniable growing attraction Sam and Jake share.

Sam says “yes” to Patrick’s proposal reluctantly because she is drawn to Jake Doe and has no idea why. Patrick actually figures out Jake Doe is Jason but pulls a Liz Webber (Rebecca Herbst) and does not tell the unsuspecting Sam! Move over Liz, the male you is popping a squat in the house of shame.

Sources tell CDL the engaged couple will plan a November wedding which will fall during Sweeps week and we all know there is nothing better than a wedding that gets interrupted! Remember the memorable Carly/Franco Haunted Star wedding?

Yes people, Patrick will again experience ANOTHER bust at the alter and by whom you ask? One guess – ROBIN SCORPIO DRAKE (Kimberly McCullough)!!!

Robin will be back to help bestie Jason Morgan confirm who he really is and confirm to Sam and everyone at the wedding that Jake Doe is in fact Jason Morgan!

There will be fallout for weeks to come after Sam finds out Patrick & Liz knew but hid the info. Patrick will then have to deal with his ex-wife coming back with yet another truth – that she lied again about Jason’s death and why she was really gone (this story is getting very old). How long will Robin be back this time? Sources say this will not be a long term gig. Robin will be back long enough to jump start a few stories and then unfortunately leave again.

Liz will be the town pariah but she will not be alone because there were others who knew the very important secret: Nikolas (Tyler Christopher), Laura(Genie Francis) and Patrick. It is going to get very sticky in Port Charles and people will choose sides.

The one good thing about November sweeps is that JaSam fans will have their favorite couple back together by Christmas and Danny will have his daddy back… no thanks to Liz, Nik, Patrick or Laura!

Once the big Jason reveal is announced to all PC a domino effect will occur hitting everyone involved with Jake Doe including Carly (Laura Wright) and Sonny (Maurice Benard). We should start seeing some momentum on GH especially since November sweeps is when the new writer’s stories are really kicking in!

Lots of happiness but also lots of pissed off people from the fallout of the Robin reveal of Jason Morgan could keep General Hospital busy for the rest of the year 2015 – who needs the other story lines? Prim and proper Laura will turn to Scott Baldwin (Kin Shriner) when the news hits and she will admit she knew the truth and also why she kept the secret. Scott will step down as DA to take himself out of a position of having to prosecute Laura’s son Nikolas for attempted murder of Hayden Barnes (Rebecca Budig). Rumor also has it that Ric Lansing (Rick Heart) will be the new future D.A. – I guess that knocks Ric out as a suspect in the who killed Silas (Michael Easton) mystery.

Patrick will have a blue Christmas without Sam – the only sad thing about that is poor Emma (Brooklyn Rae Silzer) is let down by her father again. Wonder how the new writers will write Robin out of Port Charles this time without making her look like the worst mother of all time on soaps?

Rumors are flying that Nikolas will actually fall in love with Hayden and they will become a couple – ironic isn’t it she falls in love with the person who had a bullet put in her head – wonder how she will feel when that comes out – will it be yet another wedding reveal?

As you can see from the anticipation of Robin breaking up the Sam and Patrick wedding with the shocking Jason news that GH is getting the traction it has needed for a year – the question is what took them so long? Oh yes, it was Ron Carlivati…. Maybe we should just be thankful the network stepped in and is making efforts to save our beloved soap.

Which person do you think will be the most affected by the Jason Morgan reveal? Stay tuned loyal GH watchers fall is just around the corner! Please leave your thoughts and comments in the CDL comments below