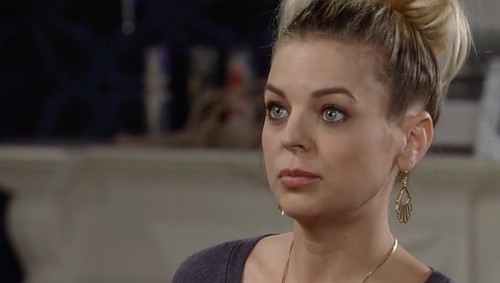 Check out these “General Hospital” spoilers for ABC’s top soap for Thursday, February 12. First of all, remember when I mentioned yesterday that Ned Ashton (Wally Kurth) keeps grousing to Olivia Falconeri (Lisa LoCicero) about his mystery flu? Well… Olivia also shared her gripe that her stomach is “off” and while you may want to blame it on a gooey grilled cheese from Ruby’s, I think what we can expect soon is pregnancy news!

Lisa LoCicero is pregnant in real life and since she had a one-nighter with Julian Jerome (William deVry) on New Year’s Eve, I think we all know who the baby-daddy will be. All I have to say is that Julian must be the most potent man in all of Port Charles – he knocked Alexis Davis (Nancy Lee Grahn) up in just a few minutes in the back of his car when he was in college. Lisa is already several months pregnant and they’re hiding her bump behind large coats and scenery.

We can soon expect her to find out she’s preggers and, in grand soap opera tradition, not tell the baby daddy until a DNA test reveals the truth. And if GH’s track record is any indication, someone may tamper with the results. I predict the paternity news will come out just in time to foil Julian and Alexis’ re-blossoming romance. I personally don’t want Julian and Olivia to turn up as a couple, but with Wally Kurth leaving in just a couple of months to go back to Days, it’s a possibility. After all, nothing brings soap couples together like unplanned pregnancy!

But on to more exciting news. Today, not one, but two people came to ask Nikolas Cassadine (Tyler Christopher) to shake the truth out of his evil granny Helena Cassadine (Constance Towers) about the bombing. Elizabeth Webber (Rebecca Herbst) wants to know if Helena is mind-controlling Jake Doe (aka Jason Morgan) (Billy Miller) and Lulu Spencer (Emme Rylan) also wants to know if her dad Luke (Anthony Geary) is being manipulated by the power-mad matriarch.

Now that Jake pleaded not-guilty to plotting to blow up PC’s movers and shakers – against the advice of his reluctant lawyer Ric Lansing (Rick Hearst) – the next step is to figure out how Helena is controlling him. A medical exam will reveal that Jake has an implant in his brain courtesy of the elder Cassadine. Just before Jake is hustled into surgery at “General Hospital” to get his Manchurian Candidate chip removed, Jake will recall that he’s really Jason Morgan but won’t be able to tell anyone.

Once back out of surgery, the Jason revelation will be gone from Jake’s mind and he will continue to be in the dark. But we can count on the super brain of Damian Spinelli (Bradford Anderson) to crack the case. Damian will recognize a certain phrase that Jake uses as a Jason-ism and will try and find out more about the mysterious stranger that may, in fact, be everyone’s favorite hit man. Between the investigative skills of Spinelli and Sam Morgan (Kelly Monaco), Jason should be back to himself soon.

Also on the Spinelli front, he’s back from Portland with daughter Georgie and Maxie Jones (Kirsten Storms) is excited to be reunited with her daughter. But if Nathan West (Ryan Paevey) arrests her for aiding and abetting Johnny Zacchara’s (Brandon Barash) escape out of town, she may be barred from seeing her daughter again. We all know a certain Port Charles judge that hates her already…

Be sure to check back in with CDL often for more “General Hospital” spoilers, casting news and other important updates.