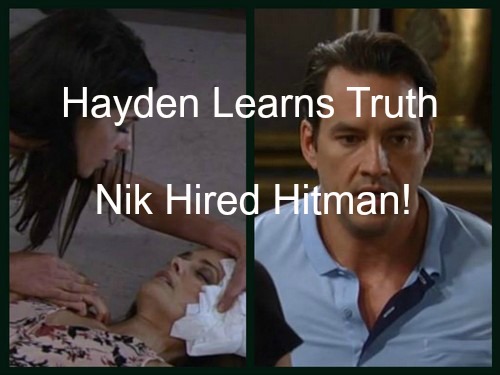 “General Hospital” (GH) spoilers reveal that Hayden Barnes (Rebecca Budig) will soon have solid evidence that she was the target of the shooting at the garage and that Nikolas Cassadine (Tyler Christopher) hired a hit man to take her out.

But what will Hayden do with this information? She could run to the cops and see Nikolas sent to Pentonville – a pretty prince like him wouldn’t last long there, but that doesn’t benefit Hayden in any meaningful way – other than a brief moment of revenge.

Hayden tends to scheme on a grander scale, so sending Nik to jail makes no sense for her. Instead what’s more opportunistic is to use that information to leverage him to do what she wants. And what’s worse about this is that Laura Spencer (Genie Francis) knew about the shooting.

And though she doesn’t want to admit it, so does Liz Webber (Rebecca Herbst). That means those two could be up for murder conspiracy charges. Hayden could send Nikolas, his mom, and his former sweetie/BFF all to prison. But she won’t.

After Nikolas wakes from the horrible injuries he suffered when Jason Morgan (Billy Miller) tossed him over the MetroCourt balcony, Nikolas has the same conundrum that Hayden will soon face – send the person that hurt him to jail or blackmail him to get what he wants.

Nikolas will hold off pressing charges against Jason for now and will keep Jason under his thumb and following his orders. But then with Hayden blackmailing Nikolas, that means she would effectively have control over both men.

Think what Hayden could do with that much power… Instead of helping Tracy Quartermaine (Jane Elliot) get ELQ back, Hayden could keep it for herself. Plus, Hayden could use Jason as her personal bodyguard and lapdog to make sure Nikolas doesn’t try and whack her again.

There is a world of possibilities open to Hayden after she learns the truth about her shooting thanks to Curtis (Donnell Turner). On the flip side, there’s going to be a world of hurt that comes with it – Hayden seems to be falling for Nikolas – that can’t all be an act.

Hell hath no fury and all that good stuff – Nikolas will pay for his former callous treatment of Hayden. Even if Nikolas tries to protest and tell her that he tried to have her killed before he fell for her – because it does seem like he loves her now – that won’t hold much weight.

Attempted murder is attempted murder, after all. In coming days we can expect Nikolas to wake from his accident with the triumphant feeling that he now has leverage over Jason only to find that victory is short-lived when Hayden turns the tables on the dark prince.