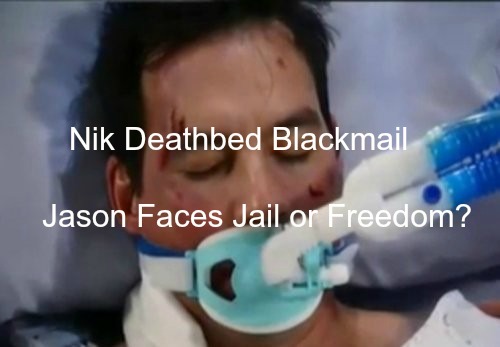 “General Hospital” (GH) spoilers indicate that Jason Morgan (Billy Miller) has another Cassadine control crisis coming his way soon. Even though Nikolas Cassadine (Tyler Christopher) started the Gala brawl, the only witness is pointing the finger at Jason.

Hayden Barnes (Rebecca Budig) has told the cops that Jason was the aggressor and totally to blame. Jason will be booked for the assault but Diane Miller (Carolyn Hennesy) should have Jason out of the PCPD on bail fast despite him refusing to comment on the attack.

And even though Nikolas is touch and go, the Cassadine wheels in his brain will already be turning. GH spoilers hint that we can expect Nikolas to wake up with an agenda ready to implement. Hayden will expect Nikolas to immediately accuse Jason of attempted murder.

But that only gives Nikolas one opportunity to punish Jason – what Nikolas has in mind will reap benefits for much longer. Nikolas has two avenues open to him – he can send Jason to jail or he can control Jason indefinitely – and Cassadines love control.

While Helena Cassadine (Constance Towers) relied on a microchip in his brain to control Jason, Nikolas can do it with a whisper in Jason’s ear. Once Nikolas wakes, he can put his plan in place. First, Nik has to tell the cops that he’s still fuzzy on what happened.

After a trauma, it’s believable that it would take a while for Nikolas’ memory to come back so he can ride that out for quite a while. Second, Nik will make sure Jason knows that he remembers everything and all it will take is one word to PCPD chief Jordan Ashford (Vinessa Antoine) to send him away.

Jason has a violent criminal past. Combine that with an attempted murder accusation and Jason could wind up in Pentonville for good. Nikolas can tell Jason that he can either do what Nikolas wants or he can watch his kids grow up from behind bars.

Poor Jason – he just got his life back. He knows who he is, knows he has two sons – Danny Morgan and little Jake Spencer (James Nigbor) – and has two women who love him Liz Webber (Rebecca Herbst) and Sam Morgan (Kelly Monaco).

Jason had so many choices open to him – and now all of it is at risk because a macho showdown went tragically wrong. Jason will have no choice but to give in to the blackmail – at least until he can find a way to get the truth out there and take away Nik’s leverage.

Essentially, Nikolas can make Jason do whatever he wants. For starters, he could order Jason to vote against the Quartermaines if they try and take ELQ from Nikolas. He could even have Jason do some of his dirty work.

Could Nikolas use this leverage to tamper with Jason’s personal life as well? Might Nikolas order Jason to get back with Liz? There is no telling what Nikolas could do to Jason. And the only complication in Nik’s blackmail scheme could be Hayden.

Hayden is still investigating her shooting and Curtis (Donnell Turner) is running ballistics. When he confirms that Shawn Butler’s (Sean Blakemore) gun was the one that shot the wall and not her head, they will know Hayden was the target.

Then it’s just a matter of finding who shot her which will lead her back to Nikolas. Of course, even with this knowledge, Hayden might not come clean to Jason or the cops – especially if she can flip it and blackmail Nikolas.

Jason should enjoy his last few nights of being a free man – Jason will either tell Nikolas no and face a certain jail sentence – or give in to the blackmail so he doesn’t miss out on his sons growing up. Neither is a choice Jason will like – but he’ll have to make one no matter what.

Stay tuned to CDL for more on the Nikolas-Jason dynamic in coming days plus tons more “General Hospital” spoilers and news.