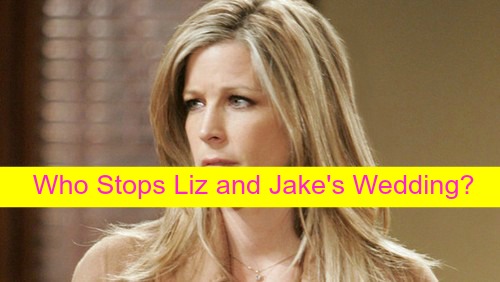 “General Hospital” (GH) spoilers indicate that there may be a crowd queuing of people who discover the truth of Jake Doe’s (Billy Miller) identity and race to tell Jake and shut down his wedding to Liz Webber (Rebecca Herbst). We are in the countdown to the Jake-Liz wedding and the Jason Morgan reveal!

But who will make it to Jake first to spill the secret? And will Jake himself already know by then? Here’s a look at some of the people who may run to Jake to try and stop the wedding and ruin Liz’s day (and her life).

Hayden Barnes (Rebecca Budig): It looks like Hayden may have recovered her memories and is just keeping her non-amnesia secret from Nikolas Cassadine (Tyler Christopher). Even if she’s still a partial amnesiac, Hayden knows the truth about Jake from eavesdropping. Hayden has no fond feelings for Liz – particularly since Liz cornered her at GH.

What is it with Port Charles people taunting people that can ruin them by revealing their dirt? This reminds me of Dante Falconeri (Dominic Zamprogna) poking at Dillon Quartermaine (Robert Palmer Watkins)… but “General Hospital” spoilers indicate that Hayden may target Liz instead of Jake.

Carly Corinthos (Laura Wright): Carly will host Jake’s bachelor party on Friday and will find out some information about Jake that will have her scrambling next week to try and confirm the information before the wedding kicks off so that she can save her new BFF who she will now suspect is also her old BFF.

Carly has never had a lot of love for Liz and once she suspects that Liz has done Jason wrong, Carly will be like a madwoman on a mission. Remember all the hell that Carly brought down on Ric Lansing (Rick Hearst) when she caught him lying about Jake having a wife in Hayden? Liz should know what Carly would do to her if she found the truth.

Robin Scorpio (Kimberly McCullough): We know that Robin is headed back to town for a brief reprisal and “General Hospital” spoilers reveal that she’s back to “tell some truths.” Since Robin has always been tight with Jason, no way is she going to let Liz pull this big FAT wedding lie over on her BFF.

Robin knows Jason is alive since she’s the one who saved his life and figuring out that Jake is Jason should be a fait accompli since she knows Jake’s DNA plus a ton of Cassadine family secrets. Robin may be hopping a red eye from Paris right know to show up just in time to blow up Liz and Jake’s wedding, but will someone else beat her to the reveal?

Damien Spinelli (Bradford Anderson): Poor Jackal has been on the cusp of discovering Jake’s true identity like three times now and has been foiled first by his hacker arrest and emergency delete of his data and then by Maxie Jones’ (Kirsten Storms) clumsy coffee spill.

Is fate conspiring against Spinelli to keep him from discovering that Jake is really Stone Cold? Will his program finally pay off or did Maxie ruin his laptop for good? It seems like when Spinelli does find out, though, he’s not the type to run to the front of a wedding chapel and shout the truth. Spin would pull Jake aside and whisper the truth and let Jake do what he wants with the info.

Laura Spencer (Genie Francis): Laura, on the other hand, is absolutely the type that would march right down the aisle and chew out Liz in front of God and everybody for letting this farce get so far. While Laura was never a huge fan of Jason’s, she does seem to like the new and improved Jason in the form of Jake.

That car knocked some sensitivity into the guy and he’s much better than he was before. Laura has already issued several warnings to Liz on this subject, but Liz is pressing on despite all the red flags that she’s doing the wrong thing. Laura may wait to see if Liz does the right thing then speak up only if Liz fails to come clean.

We’ve got one week to go until the big day – and it looks like Jake may find out that he’s really Jason prior to the wedding thanks to Spinelli (most likely) but will keep quiet to see if Liz will lie until the bitter end.

No matter what, we can expect this wedding to be sensational – the new writers are going to bring an end to this story line (at long last) with fireworks. Can’t wait. Be sure to come back to CDL all week long and every day leading up to Liz and Jake’s wedding for tons more “General Hospital” spoilers.