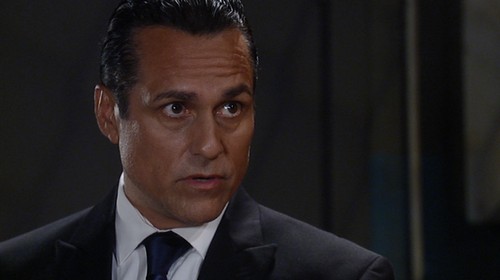 “General Hospital” (GH) spoilers regarding who shot Sonny Corinthos (Maurice Bernard) point in the direction of Julian Jerome (William deVry). But Julian isn’t the only one who has it out for Sonny. Rumor is that it’s possible that Carlos Rivera (Jeffrey Vincent Parise) is not dead and he is working with Kyle Sloane (Robb Derringer). Could Sloane have been the triggerman? Or was it Carlos?

Why would Kyle Sloane want Sonny dead – and why would he work with Carlos? Rumors and speculation abound that Carlos did not die after Anna shot him. Even though fans saw Anna Devane (Finola Hughes) and Slone push Carlos’s body off the pier and into the water some believe Julian’s henchman did not die and that Sloane pulled his body out of the water and got him medical attention.

If Carlos is working with Kyle Sloane then the former police commissioner has to be holding something over the believed dead Carlos’s head. This means –if the rumors are true – that Sloane is the one in charge and eventually Carlos will be exposed as Sonny’s shooter. This allows Sloane to prove Anna is innocent and is not a cold-blooded killer.

Another suspect in Sonny’s shooting could be Ava Jerome (Maura West). How could it possibly be Ava? She’s currently locked up for the murder of Connie Falconeri (formerly Kelly Sullivan). Fans know full well that Ms. Jerome has her contacts on the outside world and is very resourceful when she’s locked up. She has every reason to want to see Sonny dead – he has a recording of her confessing to Connie’s murder. In addition, the mob boss has sworn he will never let her see their daughter Avery again. And to add insult to injury Sonny informed Ava that little Avery will call Carly mommy! If that’s not enough of a motive for Ava to find a way to knock off the father of her youngest child we’re not sure what is!

Many fans believe that there is a possibility that Johnny Zacchara (Brandon Barash) is back in Port Charles – again – and that he hasn’t quite put to bed the rivalry between the Zaccahras and the Cornithos. But the Zacchara mob family isn’t the only one Sonny has tangled with over the years. The shooter could have come for any of these mob families – Balkans, Alcazar, Rosco, Ruiz, Wu, Sorel or Kaprov. At one time or another Sonny has gone after their territories and vice versa.

There is also the possibility – however remote – that Ava and Julian have joined forces to bring down Sonny. When “Denise” revealed her true identity as Ava she told her brother Julian that they could rule Port Charles again, all they needed to do was get ahold of the tape Sonny has implicating Ava in the murder of Connie Falconeri. But would Julian put his relationship with Alexis (Nancy Lee Grahn) in jeopardy?

What do you think CDL’ers? Who shot Sonny? Is the speculation that Carlos Rivera is still alive and has teamed up with Kyle Sloane to bring down the Port Charles mobster? Sonny may be down, but he is NOT down for the count!