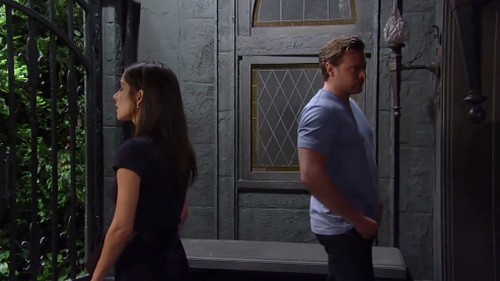 This is a short week in Port Charles with the Monday Labor Day holiday – here are “General Hospital” spoilers for the week Tuesday through Friday, September 8 through September 11 episodes. Over at the Corinthos place, Carly Corinthos (Laura Wright) will have a big chat with Morgan Corinthos (Bryan Craig) about his mental health. She’s pleased that Morgan seems to be more open to getting a diagnosis. Bobbie Spencer (Jaclyn Zeman) notices something is off with Valerie Spencer (Brytni Sarpi). Is it a possible pregnancy or just sadness over having no chance with Dante Falconeri (Dominic Zamprogna)?

Down at the docks, Jake Doe (Billy Miller) heard the shot that struck Sonny Corinthos (Maurice Benard) and protects Sam Morgan (Kelly Monaco) then goes to investigate. Jake will hear TJ Ashford (Tequan Richmond) and will be the one to save Sonny’s life. Sonny will be carted to the hospital for life-saving surgery and that’s where Kristina Corinthos Davis (Lexi Ainsworth) will show up, Sonny and Carly will say vows and marry, and Ric Lansing (Rick Hearst) will make an ass of himself.

The deal with Sonny triggers major memory flashbacks with Jake since it put him in a situation he was in many times before – protecting Sonny from danger. Jake shares his recovered memories with Sam who tries to help him figure out what it all means. But then when Jake shares the same memories with fiancee Liz Webber (Rebecca Herbst), she tries to send Jake off in another direction so he doesn’t remember the details and discover her betrayal. Liz is worried she’s about to be busted.

Anna Devane (Finola Hughes) and Kyle Sloane (Robb Derringer) have a showdown over him not coming clean about the rigged election and Nikolas Cassadine’s (Tyler Christopher) involvement. Anna feels betrayed but so does Sloane who thought he and Anna were going to have a relationship. Their relationship then takes a turn – is it a romantic change or not? Sloane also reminds her they have the bond of both knowing she killed Carlos Rivera (Jeffrey Vincent Parise).

Later, Jordan Ashford (Vinessa Antoine) updates Anna on Sonny’s shooting and TJ’s kidnapping and the other mob activity going on in Port Charles. Julian Jerome (William deVry) keeps insisting he’s not part of this mess and goes to visit sister Ava Jerome (Maura West) at the PCPD lock up. They talk about the pain of losing a child – he talks about Leo, she talks about Avery and they bond over their grief. Looks like Morgan will run into Julian this week and threatens Julian with violence over Sonny’s shooting.

Hayden Barnes (Rebecca Budig) won’t let the issue of her recovered memories drop. She asks Nikolas about her memories about Jake’s identity and Sam’s insistence that Hayden knows the truth, but Nikolas won’t admit to anything. Hayden keeps pushing and Nik won’t like it. Also, Paul Hornsby (Richard Burgi) gets some screen time this week and makes an important decision about his life. Will Paul remain in Port Charles for the time being?

All this and more this week in Port Charles! Be sure to check back with CDL daily for more “General Hospital” spoilers, gossip and more!