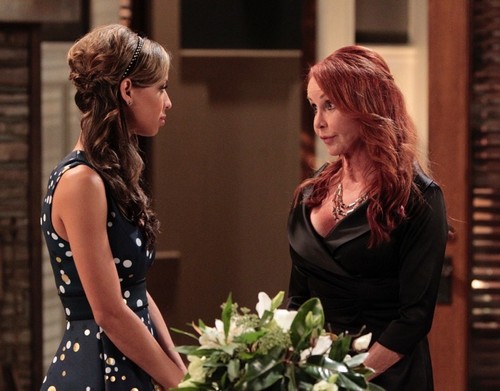 “General Hospital” spoilers indicate that most of this week will surround action at the Corinthos mansion regarding the wedding and the murder investigation. Here’s what you need to know for the week of August 31 through September 4 episodes.

Carly Corinthos (Laura Wright) and Sonny Corinthos (Maurice Benard) are gearing up for their wedding which will start on Wednesday but will continue through to the week of September 7. Lots going on – but this may be the world’s slowest wedding. Sonny and Carly’s concern over Morgan Corinthos (Bryan Craig) and his unraveling mental state wil distract them from their wedding plans.

Morgan will head to Silas Clay’s (Michael Easton) looking for Kiki Jerome (Hayley Erin) with no clue that Kiki knows he’s been shagging Ava Jerome (Maura West). Kiki goes nuts on Morgan, not only letting him know that she knows about he and Ava, but that she also suspects that he may have killed her father to try and hide the truth. Kiki dumps him and Morgan freaks out.

Morgan desperately wants to keep her, sure Kiki is the key to his sanity. Morgan will try all sorts of offers to Kiki to stay with him, to little avail. Morgan then seeks out his older brother Michael Quartermaine (Chad Duell) for help. Later, Michael will share his concerns about Morgan with his sweetie Sabrina Santiago (Teresa Castillo).

Carly and Sonny hope Michael will show up to the wedding (he will) thanks to an intervention from Sabrina. Also, Carly will get some touching wedding gifts from the female Spencers. Lulu Spencer (Emme Rylan) will be there as will Bobbie Spencer (Jaclyn Zeman) and Valerie Spencer (Brytni Sarpi). Bobbie notices something about Valerie, like she might be pregant.

TJ Ashford (Tequan Richmond) is taking care of the cake because why? Who knows? Anyway, TJ runs into problems and asks Molly Lansing-Davis (Haley Pullos) for help but that’s not enough. TJ makes a call to Sonny who will pitch in to save the wedding pastry. Rumor has it that Sonny will be shot at some point during the proceedings, but will survive to say his I do’s.

In non-wedding news, Lulu thinks Maxie Jones (Kirsten Storms) should audition for the lead in Dillon Quartermaine’s (Robert Palmer Watkins) movie. Maxie turns in a stunning audition and Dillon is floored – he wants to hire her on the spot. Lulu is extremely touched by the performance and it makes her think about how Dillon feels about her and is expressing it through his writing.

Will Nathan West (Ryan Paevey) be excited for Maxie when he hears the news? No reason for him not to, except that Nathan is still feeling weird about what he knows about Dante Falconeri (Dominic Zamprogna) and Valerie shagging. Maxie wants to do it and, heaven knows, shopping isn’t much of a career anyway. Go Maxie go!

Lulu is feeling better about her relationship with Valerie, but that sensation won’t last long. Dante has a chat with his boss Jordan Ashford (Vinessa Antoine) – personal, not work-related. Jordan tells Dante she doesn’t like her son TJ living with his dad Sonny. Dante feels her pain but reassures her that her dad wouldn’t put TJ in danger. Sure… Jordan is not mollified.

Dante and Nathan also give Jordan an update on the Silas investigation. They’ve got rat fink Ric Lansing (Rick Hearst) working for them to ferret out the truth, but only to cover his own butt. Madeline Reeves (Donna Mills) confesses that she went to Silas to get him to sign the papers to get control of Nina Clay’s (Michelle Stafford) money. Looks like Silas didn’t want to, so Maddy knifed him.

Franco (Roger Howarth) hangs with Nina in the PCPD lock up and shares some news with her that might upset her. How long will the cops keep Franco and Nina locked up when they know neither of them whacked Silas? Looks like they may spend all of this week behind bars again. At least they can hang out and have more juice box dates.

Hayden Barnes (Rebecca Budig) has some recovered memory flashes. One is of a steamy smooch with Nikolas Cassadine (Tyler Christopher). Looks like Hayden might be back in his bed before she realizes that Nik was the one who put a bullet in her brain. Jake Doe (Billy Miller) and Sam Morgan (Kelly Monaco) continue looking into Nikolas and his shady ELQ antics.

Sam and Patrick Drake (Jason Thompson) get a surprise visitor – it’s Anna Devane (Finola Hughes) back in town after her jaunt to Scotland. Anna has to deal with Kyle Sloane (Robb Derringer) who’s hoping to pick up where they left off. Anna is not ready for that but she does lean on Sloane to help her investigate Nik and his role in the election tampering.

That’s a troublesome ask for Sloane to get since he was also involved with the election fraud and has been out doing dirty work for Prince Nikolas. Sloane won’t want any of that to come to light, but it all will be aired. Anna comes clean to Jordan about shagging Sloane then asks Jordan’s help to look into Sloane. Will Jordan help if she knows Anna is going after Mayor Lomax?