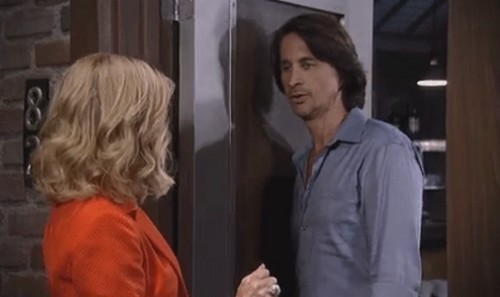 Here are the “General Hospital” spoilers you need for the Monday, August 31 episode of the ABC soap –Morgan’s mental state is unravelling. Morgan Corinthos (Bryan Craig) comes to see Kiki Jerome (Hayley Erin) brimming with manic excitement over how much he loves her. But Kiki drops the truth bomb on him that she knows he’s been shagging her back from the dead mom Ava Jerome (Maura West). Morgan will try to deny it, but Kiki’s got him dead to rights.

Also, Kiki accuses Morgan of killing her dad to keep Silas Clay (Michael Easton) from telling her that he was sleeping with Ava. Morgan protests everything but Kiki is certain he’s guilty of betraying her and hurting her dad. Nothing Morgan says can talk her down. Morgan scrambles to try and get her to stay with him, but Kiki is so done with him.

Carly Corinthos (Laura Wright) tells Sonny Corinthos (Maurice Benard) that she thinks all of Morgan’s antics and bad judgment are about to catch up to him and blow up in his face. Carly is afraid that if Morgan doesn’t get an intervention, he’ll end up off the deep end. Sonny is also concerned and they wonder what they can do for their son.

Holy cow – Silas’ apartment was like Grand Central Station the day he was murdered – Madeline was there, Nina Clay (Michelle Stafford), Franco (Roger Howarth) and Ava Jerome (Maura West). That’s insane. Looks like Madeline tried to get Silas to sign the papers she needed his John Hancock on to get access to Nina’s money and Silas told her to shove off so she put a knife in his back.

Is Ric wearing a wire? If he’s not, look for Ric to spin this into the best possible scenario for him. Ric wants Nina’s millions, would like to cheat Madeline out of her share and get away clean. Too bad Nathan will figure out his gaslighting scheme, but not today. Ric will get the answers the investigators need. Now we know who offed the good doctor…

Lulu Spencer (Emme Rylan) wants Maxie Jones (Kirsten Storms) to audition for Dillon Quartermaine’s (Robert Palmer Watkins) movie. Maxie caves in under the combined pressure of Dillon and Lulu and does an amazing read of the script with Dillon. Lulu watches and the words Dillon wrote, obviously about her, resonate and have her feeling warm fuzzies about her ex.