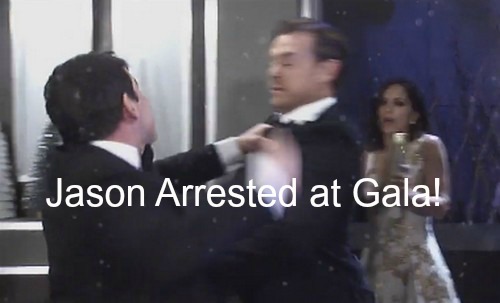 “General Hospital” (GH) spoilers tease that there will be a heated showdown between Jason Morgan (Billy Miller) and Nikolas Cassadine (Tyler Christopher) at the Nutcracker Gala that gets physical and leaves one in big trouble for his actions.

You’ll recall the primary reason that Nikolas was keeping Jason’s identity secret was because of his dirty corporate antics. Jason owns a percentage of ELQ stock – according to Edward Quartermaine’s will, Jason’s share is 12%.

Jason’s shares were once controlled by Sam Morgan (Kelly Monaco) who split the proxy rights between AJ and Tracy Quartermaine (Jane Elliot) and then they later came into Michael Quartermaine’s (Chad Duell) hands after AJ’s death.

The bottom line is, with Jason back alive, he’s got a share of the company, rights to vote for control of who runs it, and a seat on the board if he wants it. This means Jason could help the Qs flip the company and kick Nikolas out as CEO.

GH fans have not yet found out why Nikolas needs control of ELQ so desperately. Nik has said the Cassadine clan needs the money since Helena Cassadine (Constance Towers) and others squandered the family fortune on their schemes.

But there are also persistent rumors that Nikolas is somehow involved with Paul Hornsby (Richard Burgi) and that ELQ may be used to launder criminal profits. Whatever it is, the bottom line is, Nikolas badly needs to keep control of ELQ.

He has a bullet put in Hayden Barnes’ (Rebecca Budig) brain to keep her from spilling Jason’s identity so we know it’s a huge deal. But with the truth out, Nikolas needs to find another way to keep Jason from exercising his ELQ votes.

Nikolas may have found the tool in Jason’s known reputation for violence. Jason may not want to be a hit man anymore, but his tendency towards violence is always just below the surface – and Jason has physically threatened Nikolas on many occasions.

Plus, Jason just punched Nik’s lights out at The Floating Rib. But that place is a seedy dive where lots of unseemly things happen. What Nikolas needs is for Jason to publicly assault him in front of reputable witnesses so he can press charges (or just threaten to).

At the Nutcracker Gala, Nikolas will take advantage of Jason’s hair-trigger temper to provoke him into acting out. It won’t take much to set Jason off. Jason’s nerves are already frayed by finding both Liz Webber (Rebecca Herbst) and Sam at the event.

All Nikolas has to do now is goad him. Nikolas can say again that Jason’s family is better off if he had stayed dead or remained amnesiac Jake. Nikolas could also tell him that since Jason broke it off with Liz, he may offer her some “comfort” and imply dirty things.

Whatever it is, Nikolas will set Jason off. In scenes from the ball, we see Nikolas take a swing at Jason, but then Jason will do something far worse. This will give Nikolas the leverage he needs to keep Jason out of his way at ELQ.

Will Jason be arrested? We know Carly Corinthos (Laura Wright) and Sonny Corinthos (Maurice Benard) have to help Jason out of a tight spot this week – will they have to bail him out of the PCPD for assaulting Nikolas?

And will Nikolas hold his rights to press charges over Jason’s head to keep him from voting against him at ELQ? And will Jason respond to the blackmail the way Nikolas wants? Jason can be very unpredictable and, right now, he’s emotionally unstable.

What do you think GH fans, what will Nikolas tell him that will set off Jason? Is it about Sam cuddling up to another man while he was supposedly dead? Is it about Liz? Whatever it is, Nikolas will goad Jason into an attack while Hayden – and others – look on horrified.

Don’t miss a moment of the Gala action and come back to CDL often for more “General Hospital” spoilers and news.