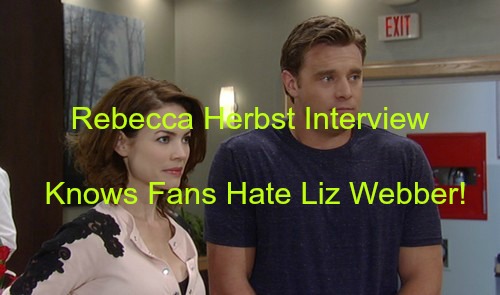 “General Hospital” (GH) spoilers reveal that soon, Jason Morgan (Billy Miller) will soften in his anger towards Liz Webber (Rebecca Herbst) over her months of lies about his identity. But it will take hard-core GH JaSam fans much longer to move past it.

And Liz’s portrayer Rebecca Herbst has decided that’s okay with her although when Herbst first heard about Liz’s storyline of deceit about Jason’s identity, she felt it was out of character. But then she decided to just embrace the part and play it to its full extent.

The result has been that even GH fans that liked Liz before suddenly found themselves hating the character and this was reflected on fan boards and in comments to “General Hospital” spoilers and update posts.

Fan comments have ranged from irritation that Liz seems to be acting out of character all the way to outright hatred of the character and rants that she should be punished in terrifying ways. Unfortunately, some of the negative attention was aimed at the actress.

No matter how passionate we are about a show, we have to remember Rebecca Herbst is playing the script she’s handed – and she’s playing it well. And it’s a testament to her acting chops that fan outrage has been so vocal. To be fair, though, Liz has never been squeaky clean as a character.

She’s always had her foibles – just like any character – and had struggles in her relationship with Lucky Spencer (Jonathan Jackson) even before she heated up with Jason. And the rivalry between Liz and Sam Morgan (Kelly Monaco) has been intense over the years.

Even for those that hate Liz’s character and see her as an obstacle to the relationship they want restored – JaSam – you can clearly see that Liz is acting from a place of genuine love. Liz has loved Jason a long time and they never got a chance to see if they had a real shot at forever love.

And when Jake Doe was wheeled into the ER – Liz didn’t know who he was – she just knew she was attracted to him – as Jake was to her. In fact, Sam was around as well, but it was Liz that Jake gravitated to and this resulted in her falling for him even before she knew he was Jason.

So in a way, Liz’s motives were pure – she didn’t love him because he was Jason. She fell for him as Jake, then when she found out he was Jason, the attraction and deep feelings for him made much more sense. His identity reveal only gave context to her love – it didn’t create it.

And, on the flip side, Sam didn’t love Jake – not ever. She liked him, sure, but she wasn’t getting warm fuzzies about him. Jake was ordered to kill Sam, so Jake and Sam got off to a rocky start, but still – Sam never fell for Jake and Liz definitely did. That means something.

Now that Jason knows who he is, he has a decision to make – and fans are deeply divided. Some hope he heads back to Sam and reunites and forgets the divorce. But a legion of others want to see Liason finally given a chance at love.

To her credit, Rebecca Herbst has handled the ire directed at her personally over this storyline with aplomb. She recently told Soap Opera Digest, “A whole bunch of people are up in arms about her [Liz’s] actions and now they’re all arguing with each other and, in a weird way, that means I’ve done my job.”

Christmas week on GH will see more of the Sam-Jason-Liz storyline unfold with Sam revealing she still loves Jason, Liz mourning him walking out on her and breaking the news of their split to her kids, and Jason feeling torn between them – but moving closer to forgiving Liz.

Stay tuned to CDL for more “General Hospital” spoilers and news every day of the week!