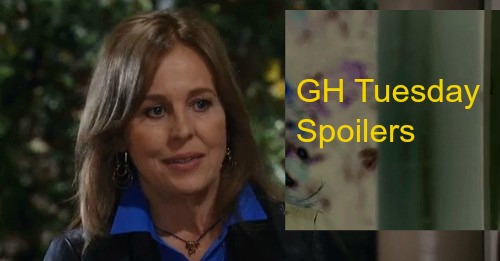 These “General Hospital” spoilers will get you ready for the October 6 episode of the hit ABC soap. Jake’s big secret and Paul’s many secrets take center stage on GH Tuesday.  Liz Webber (Rebecca Herbst) is reeling from the surprise phone call from Hayden Barnes (Rebecca Budig) that reminds her that others know about Jake Doe’s (Billy Miller) identity.

As soon as that’s done, in walks Jake’s wife Sam Morgan (Kelly Monaco) with Patrick Drake (Jason Thompson) to announce their recent engagement. All signs are clearly telling Liz to give up on her scam, but she won’t.

The phone call concerned Jake who took note of the phone number and will investigate who was calling that upset his fiancée into freaking out and lying to him. Laura Spencer (Genie Francis) is also ready to tell Liz she needs to give up the scam, but first she stops by to see her son Nikolas Cassadine (Tyler Christopher) who’s forcing a steamy kiss onto a reticent Hayden.

Laura has a mission and it’s all about pushing buttons. She tells Hayden that she holds the key to Jake’s identity – although Hayden can’t quite recall the answer. This lets Hayden know clearly that’s what Nik and Liz are hiding since that’s the hot button point for both of them. Laura wants Nikolas to come clean and Hayden eavesdrops on their talk then wonders why her memories aren’t returning.

Paul Hornsby (Richard Burgi) has so many dishonest irons in the fire, it’s impressive he can keep track of all his dealings, legal and otherwise. Paul takes a call to order an illegal action of some sort and makes it clear to the caller that he doesn’t want his good name as DA to be associated with whatever he’s plotting to make happen.

Tracy asks Paul what’s going on and what he’s hiding from everyone but he won’t tell the truth – of course. Paul hedges and says it’s DA stuff even though Tracy distinctly heard him making it not about DA stuff. They end up in an argument and this sets Tracy on a road of suspicion about Paul’s motivations and why he’s really in Port Charles. She has no idea the depth of what her ex is up to.

Julian Jerome (William deVry) also thinks someone is keeping secrets – his sister Ava Jerome (Maura West). They hang out so he can spend time with his niece Avery and then Julian can’t help himself but asks about the family business. Ava hedges so it’s obvious she’s not coming completely clean with her brother. Will Julian drop it or is he willing to get back into the business to partner with his sister?

At General Hospital, things are looking dire for Sonny Corinthos (Maurice Benard). He made it through the surgery in one piece but hasn’t woken up. Will this be a long-term coma thing? Nah. Carly Corinthos (Laura Wright) sits crying at her almost-husband’s bedside and begs him to wake up and come back to her and come back to their kids.

Sonny will wake up soon, but the news won’t be good. Expect Sonny to have physical issues – he likely won’t be able to walk and he may have some other problems that may be neurological like speech issues or memory problems. This event is traumatic and Sonny has a long recovery ahead of him that may be the biggest challenge of his life. Good thing he’s got Carly.

Franco (Roger Howarth) is done with secrets and so is Nina Clay (Michelle Stafford) – they want a fresh start and it looks like Franco wants Kiki Jerome (Hayley Erin) to be part of it. Franco wants Nina to buy a home for them all to settle into together. Nina isn’t so sure and neither is Kiki, but Franco wants both the women to commit to trying it Brady Bunch style with two parents and someone else’s kid.

This and so much more on Tuesday’s GH – watch then come back to CDL for more “General Hospital” spoilers, gossip and more.