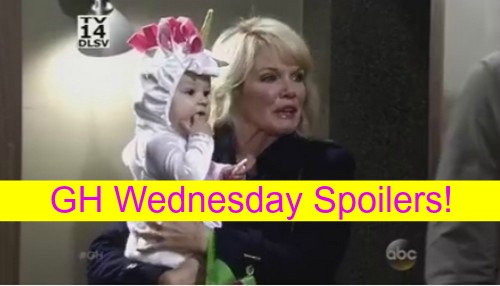 These “General Hospital” (GH) spoilers will get you ready for the October 28, Wednesday, episode is all about custody and infidelity. Both Sonny Corinthos (Maurice Benard) and Ava Jerome (Maura West) get troublesome updates from their lawyers about the custody case. Seems strange that both sides would be so worried, but hey, it’s Port Charles.

Ric Lansing (Rick Hearst) will be happy to have some time with Sonny, even if he’s delivering bad news. You’ll recall that Carly Corinthos (Laura Wright) and Michael Quartermaine (Chad Duell) have barred Ric from seeing his big brother but, on Wednesday, he’ll finally get some face time.

Ric will tell Sonny that their custody case could be on the rocks because of his paralysis. With Sonny about to be transferred to the long-term rehab wing of the hospital, he can’t care for his daughter. Baby Avery certainly can’t live at the hospital with Sonny.

Both Carly and Sonny will tell Ric that’s why they went ahead and got married, but Ric will explain that with one healthy parent and the other unable to care for himself, much less a baby, it could be a slam dunk in Ava’s favor.

Meanwhile, Scotty Baldwin (Kin Shriner) goes to talk to Ava about her side of the custody case. Now that she’s back as the head of Jerome mob, Scotty thinks that Sonny may try to make her look bad on this account since he’s technically out of the mob because of his paralysis.

Scotty tells her what also makes her look worse is her will rift with Kiki Jerome (Hayley Erin). If the truth of Ava’s affair with Kiki’s BF Morgan Corinthos (Bryan Craig) comes out, Ava could kiss custody goodbye.

Ava now has to go Kiki to ask for help with the custody case. But how receptive will Kiki be in this matter? Ava will plead for a reconciliation but it may fall on deaf ears. Morgan Corinthos (Bryan Craig) also has a talk with Kiki about what she’s doing with her life these days. Will Morgan criticize her for living with Franco (Roger Howarth) and Nina Clay (Michelle Stafford) and rejecting her mom? Morgan doesn’t want Ava to win the custody case, but he also hates seeing Kiki and Ava like this.

And what’s up with Dante Falconeri (Dominic Zamprogna)? He knows that Dillon Quartermaine (Robert Palmer Watkins) has the goods on him, so why does Dante keep prodding Dillon? How far does he think he can push Dillon before he snaps? Looks like Dillon has already snapped and is ready to tell Lulu Spencer (Emme Rylan) about Dante cheating. But it’s not quite time for Dante’s dirty secret to come out and either Dillon will back off at the last moment or he’ll be interrupted.

Dillon will walk away frustrated and then Maxie Jones (Kirsten Storms) will demand answers from Nathan West (Ryan Paevey). Has Maxie figured out that Nathan and Dillon are both keeping the same secret? Later, Lulu has a chat with Valerie Spencer (Brytni Sarpi) about her fertility issues and upcoming implantation. Will Valerie offer some eggs to help them make some more embryos and increase their odds of having a baby?

When Dante see Lulu and Valerie talking, his paranoia kicks into high gear. Dante assumes the worst based on Dillon’s threats and goes to confront Valerie after the talk. Does Dante get a free car wash after 10 confrontations with Valerie? He needs to chill the hell out (but he won’t). Valerie is going to be annoyed with him but will tell him that of course she didn’t say anything to Lulu since she doesn’t want to hurt her cousin anymore. Will someone overhear them talking?

Jake Doe (Billy Miller) meets with Damien Spinelli (Bradford Anderson) to go over everything that Jake and Spinelli know to try and crack his identity case. Will Jake share the tidbit about little Jake Spencer (James Nigbor) saying he’s his real daddy? If so, could this send Spinelli digging into little Jake’s records as well and finding out that he had a DNA test done too? GH rumors indicate that Spinelli will get a big break from the medical records.

All this and more on Wednesday’s GH – watch then come back to CDL for more “General Hospital” spoilers, gossip and more.