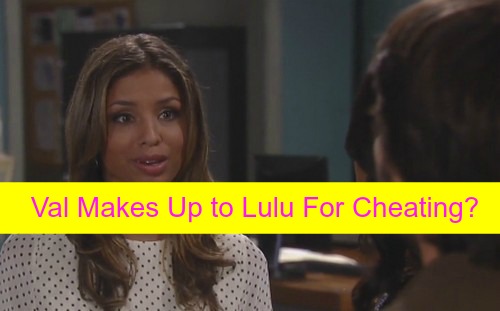 This “General Hospital” (GH) spoilers post concerns embryos and fertility plans. Looks there is more baby drama ahead for Lulu and Dante with a twist… If you were paying close attention to Monday’s GH, you’ll notice that Dr Kelly Lee (Minae Noji) warned them of the low odds of success.

This is important. Head co-writer Jean Passanante has a classical education from Dartmouth and is big into literature and theatre – this means she often uses staple literary devices – one of which is foreshadowing. Plus, she likes to drop Easter eggs into the script. In this case, it seems like the “egg” dropped may be both literal and figurative.

Dr Lee told Dante Falconeri (Dominic Zamprogna) and Lulu Spencer (Emme Rylan): “Not all embryos are viable after thawing. Success rates depend on the number of eggs fertilized. If there were 10 embryos, the odds would be 65%. With only one embryo there’s a 16% chance of success.”

Those are shockingly low odds. The script could have just told us the 16% info but because they included the data on how high the odds of success would be with more eggs, it seems like a heads up for all of us to consider that Lulu and Dante may be on the hunt (more Easter egg humor) for more embryos.

“General Hospital” spoilers indicate that this week, Lulu will have a sit down and heart to heart talk with her cousin Valerie Spencer (Brytni Sarpi). Dante will see them chatting and freak out that Val is telling her about the affair. Lulu will share with Valerie that she and Dante want to have another baby but that the doctor has given them dismally low odds of success.

Because Valerie is a kind person – and because she feels guilty as hell for sleeping with Dante – Valerie may offer to donate eggs for Lulu and Dante. Valerie is a Spencer, after all, so she shares DNA with Lulu.

If you check out the Spencer family tree, what you see is that there are only three female cousins in their childbearing years. There’s Lulu, Valerie and Carly Corinthos (Laura Wright). And Carly may not have any viable eggs left. So really, Valerie is the only close family with a basket of fertile eggs.

All signs point to Valerie offering her eggs so they can have more embryos and increase their odds of getting a viable fetus. Lulu would have to carefully consider an offer like that, but the big factor for Lulu is not the genetics of the baby she would carry, but the experience of gestation.

Remember, Lulu told Dante what she wants more than anything is “a chance to carry our child. I want to feel the baby growing inside of me.” Lulu wants a pregnancy of her own since Rocco was gestated by Britt Westbourne (Kelly Thiebaud).

It seems in this case that Lulu would be open to gestating a Spencer-Falconeri baby that wasn’t a perfect match for her DNA, but the next best thing. But even if Valerie does offer her eggs for donation to Lulu and Dante, it may all be a moot point soon when Lulu and Dante’s marriage implodes.

After Valerie and Lulu have their heart to heart talk this week, a paranoid Dante will demand that Val tell him what she told his wife. As usual, Valerie will be annoyed with Dante’s antics but will answer his questions.

Lulu plans to start her fertility regimen the day after the Halloween party on the Haunted Star, but then those plans will be for nothing when her marriage blows up. It will all come down to the behind the scenes footage from Dillon Quartermaine’s (Robert Palmer Watkins) movie that will show Valerie telling Dillon about her one nighter with Dante.

Lulu will be crushed and this will spell the end of her marriage – and her baby plans – at least for now. Passanante has said in interviews that Lulu and Dante would end up together in the end, but there will be some serious trials for them along the way – and it looks like their troubles are just getting started.

The Dante-Lulu cheating revelation will be crushing for Lulu since she’ll know her cousin and husband betrayed her and she’ll be hurt again when she discovers Dillon also knew and kept it from her. Expect an inconsolable Lulu by early next week.

Be sure to check back with CDL for daily detailed “General Hospital” spoilers plus gossip, casting news and more.