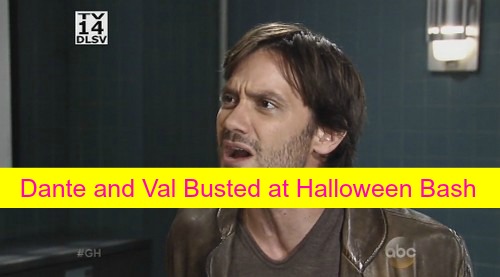 This “General Hospital” spoilers looks at unfortunate events at the annual Halloween party on the Haunted Star – when Dante Falconeri’s (Dominic Zamprogna) past comes back to haunt him! Looks like Dante’s time runs out on Halloween and it will be a real scream-fest!

You remember the footage the intern shot behind the scenes of Dillon Quartermaine’s (Robert Palmer Watkins) movie? The guy captured on tape when Valerie Spencer (Brytni Sarpi) confessed to Dillon that she and Dante had a one night stand.

Then the intern tried to warn Dillon about what he had filmed, but Dillon was too wrapped up in his Lulu Spencer (Emme Rylan) melodrama to take heed. Dillon brushed the kid off and said to film whatever he wanted.

That footage will come into play at the Halloween party. You’ll also recall that Dillon and Maxie Jones (Kirsten Storms) talked Lulu into making the Halloween party a fund raiser for the movie so they can move filming off the boat. Lulu agreed and so the party will feature a component to do with the film. Dillon never got too far into shooting before things started to fall apart so he may not have too much finished film to show off.

So instead, Dillon may invite the intern to show off his behind the scenes footage to show what’s going on and encourage people to donate to the crowd funding efforts for the film. That opens the door for the Valerie confession to show in front of a crowd of people Lulu and Dante know – with Dante and Lulu present and for Dante’s cheating secret to come out in a big way. The question is, did Dillon know that scene was on the footage to be shown?

Even if Dillon didn’t know, Lulu won’t believe that he didn’t orchestrate her public humiliation to blow up her marriage to Dante. Another angle that might come into play is that Lulu was planning on scheduling the implantation of her embryo right after the party using some of the party loot to cover the cost.

But Lulu is supposed to get some news about her implantation prior to then. If it’s that she has a short window of time to implant, she may have the embryo deal done prior to the party.

There’s a possibility then, that Lulu will already be implanted with her baby with Dante (or a baby anyway – we don’t know yet if that embryo is legitimate since the Cassadines may have tinkered with it).

This could be the sitch when she finds out that Dante cheated on her with Valerie and has been lying to her face for months when he’s had chance after chance to come clean. Lulu is outraged that she felt such guilt over the Dillon kiss when Dante had already shagged her cousin.

But don’t look for Lulu to go running into Dillon’s arms. She may blame Dillon for keeping the secret instead of telling her like a good friend would – and then letting it come out in such an awful public way.

Maxie will also be outraged that Nathan West (Ryan Paevey) has known that Dante cheated on her BFF and has kept it from her for months. Last of all, Valerie will feel horrible that her dirty secret came out in public and, no doubt, she’ll run out humiliated.

This is going to be a big mess, and Lulu will either pack up and take Rocco and head for Carly Corinthos’ (Laura Wright) house or head to Wyndemere to be with her mom Laura Spencer (Genie Francis) and brother Nikolas Cassadine (Tyler Christopher).

Alternately, she may just kick Dante to the curb which could send him over to Casa Corinthos to stay and begin his descent into darkness over the loss of his wife, child and embryo child.

We’ve got a little more than a week until the long-awaited reveal of the Dante/Valerie affair and the fallout from these fireworks should be spectacular. And while it looks like the Falconeri marriage may be doomed for good, new writers Jean Passanante and Shelly Altman have assured fans that Dante and Lulu will works things out eventually, but there will be a long and bumpy road ahead for them.

Don’t miss a moment of GH action then come back to CDL for more “General Hospital” spoilers, gossip and more.