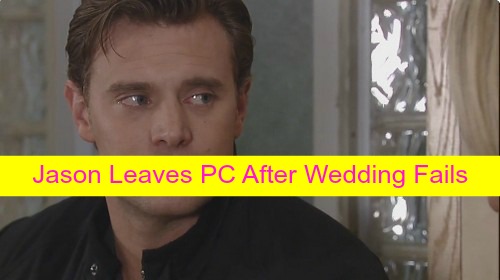 “General Hospital” (GH) spoilers looks at the fallout from the blowup at Jake Doe (Billy Miller) and Liz Webber’s (Rebecca Herbst) wedding and how two leading men will head out of Port Charles in the messy aftermath. The long awaited ‘Jake is Jason’ reveal is almost here!

“General Hospital” casting news confirms that Patrick Drake (Jason Thompson) is out of Port Charles within the next month or so and rumors are he’s headed to Y&R. Thompson’s contract is up and he’s ready to leave GH reportedly because he’s disenchanted with the storylines Patrick has had. Rumor has it that Thompson is in talks with Y&R as well as a prime time show for a new recurring part. This means that Thompson is out for good, but that doesn’t mean that Patrick couldn’t come back – just with another face.

The Jake/Liz wedding is set to be explosive with Jake dumping Liz at the altar for her long-running lies about his identity. The Jason reveal also sets the stage for a split between Patrick and Sam Morgan (Kelly Monaco).

“General Hospital” rumors predict that Patrick and Sam may elope prior to the Jake/Liz nuptials which would make the Jason reveal doubly shocking for them. Not only is Sam’s husband alive, but they would be in an invalid marriage now that her hubby is back.

This is the perfect opportunity for Patrick to leave Port Charles and head to Paris to reconnect with Robin Scorpio (Kimberly McCullough) since he may decide fate does not want him to have a romance and happy marriage in PC.

Patrick’s nuptials with Sabrina Santiago (Teresa Castillo) were interrupted by Robin being back from the dead and now he would suffer a second marriage interruptus by Jason returning from the dead. That’s a sign that Patrick needs to avoid weddings in general.

Patrick’s exit, no matter where or when he goes, spawns the question of what will happen to Emma Drake (Brooklyn Rae Silzer) when he leaves. Will Patrick take her along? This would set the stage for Emma to return later and be SORAd.

You’ll recall that Josslyn Jacks was just SORAd and they replaced Hannah Nordberg with Eden McCoy who is several years older than the actress she replaced. This makes the other kids in Port Charles of the same age a mismatch.

Emma could be aged and brought back but this would be a shame since Brooklyn Rae is a great actress, but the story needs what it needs. Emma could be left behind with her grandma Anna Devane (Finola Hughes) but it would be odd for Patrick to leave Emma parentless.

Robin is slated to be back soon to do some storyline wrap and Patrick and Emma could leave with her. What we know for certain at this point is that Patrick is leaving Port Charles, but he could return as a recast (maybe sooner than we expect).

What may make Patrick’s departure all the more poignant is the exit of Billy Miller as well. Billy Miller is cast in the “Urban Cowboy” movie pilot for a FOX primetime series as a character named Bobby, and it looks like it might be a leading role.

But don’t panic – Jake/Jason is not leaving for good. Miller is still under contract for quite a while, but he has a break planned for the end of the year for a few weeks since he’s been working non-stop for months while Jake’s storyline was front and center. What’s ambiguous is whether Miller’s on-screen hiatus will be at the end of the year or later.

Since GH films 6 to 8 weeks ahead, it’s not clear when the absence will occur. The most dramatic timing would be for both Jake and Patrick to walk out after the wedding leaving both Sam and Liz without the men in their lives.

Alternately, Patrick may leave after Sam tells him she has to be with her long-lost husband despite Jason’s obvious and recurring penchant for violence. This also means that Liz will lose her fiancé and BFF with these two exits.

So why would Jason leave Port Charles? He could go elsewhere for some sort of cutting edge treatment to try and cure his amnesia. Alternately, Jason could just run off because he needs time to sort through the reality of being Jason with no memories, a wife he doesn’t love or remember, and kids he didn’t know he had. He may simply be overwhelmed and needs to catch his breath away from all the Port Charles chaos to figure out what he wants to do.

It will be interesting to see how Jean Passanante and Shelly Altman handle the permanent departure of Patrick and the short-term departure of Jason and whether the two leaving will coincide or hit one after the other.

No matter how the departures are orchestrated, this will definitely shake up the status quo in Port Charles. We’ll miss Jason Thompson, but with GH now casting for a leading man in his 30s, they may already be planning to replace the sexy neurosurgeon with a new actor. Stay tuned to CDL for more “General Hospital” spoilers, casting news and more!