The Young and the Restless Spoilers: Jason Thompson Cast on Y&R After Quitting General Hospital as Dr. Patrick Drake? 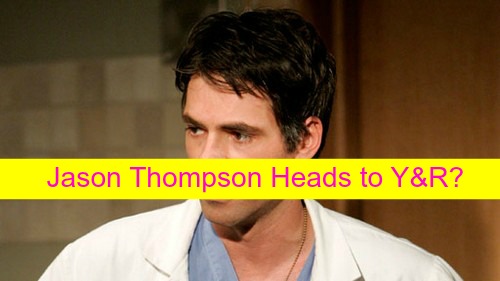 “The Young and the Restless” (Y&R) spoilers are in and it looks like Jason Thompson could be headed to Y&R. Earlier in the week, CDL reported that Jason Thompson, who plays Dr. Patrick Drake on GH, decided NOT to renew his contract, ending his long run on “General Hospital.”

It was speculated at the time Thompson was going to move to another soap opera. Social media exploded with rumors that he was definitely headed to “Y&R” and expected an announcement in the coming weeks.

The first person that was tossed around was Adam Newman. There have been rumors that Justin Hartley COULD be out as Adam after fulfilling his one-year contract with the CBS daytime drama. He came to the soap as an established prime-time actor bringing life to the character of Adam. It seems unlikely that he’d leave the role now, especially after being praised by the writers and production team.

Chuck Pratt, Jr. stated in an interview recently he would do whatever he had to do to keep Eric Braeden and Justin Hartley together, praised their on-screen chemistry. Justin Hartley is rumored to have signed a two-year contract this week. There has not been a confirmation from CBS or Justin Hartley.

Burgess Jenkins has not been well received by fans since he stepped into the role. Many felt he was much older and stiffer than Billy was mean to be portrayed. He has made the role his own recently and nailed his performance this week with the emotional testimony about Delia. As much as some fans would like to see him recast, it looks like those fans are stuck with him another year. An inside source revealed that Jenkins was sticking around for at least another year.

Ricky Williams [Peter Porte] was killed by his father and he fell to the ground. The event had a profound effect on Paul [Doug Davidson]. Not only did he have to accept this son passed away, but he was the one who shot him. It has been rumored a few months that the writers were toying with the idea of bringing him back with a new face, claiming he had plastic surgery. Frankly, the storyline sounds like the Adam and Gabriel Bingham storyline part two.

Joe Clark [Scott Elrod] is one of those characters you love to hate. He’s devilishly handsome, somewhat evil, and a complete slim ball with business practices. When Joe first arrived in town, it was speculated that he was related to Matt Clark [Eddie Cibrian, Rick Herbst], possibly an older brother. As time went on, that rumor fizzled out when nothing came of it.

With Dr. Anderson’s [Elizabeth Bogush] obsession with Sharon Newman [Sharon Case], rumors that Jason Thompson could be cast as part of the Clark family with a vendetta against Sharon and Nick for destroying Matt Clark’s life leading up to his death.