‘The Young and the Restless’ Spoilers: Jack Blamed For Cabin Killings Upon Return, Flack Responsible for Kelly’s Murder

BY Heather Hughes on May 22, 2015 | Comments: 3 comments
Related : Soap Opera, Spoiler, Television, The Young and the Restless 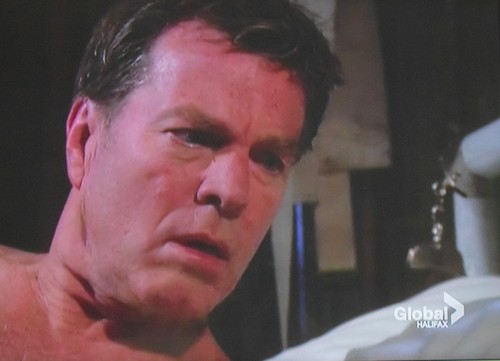 “The Young and the Restless” spoilers tease that Kelly’s (Cady McClain) death will allow Jack (Peter Bergman) to finally make it back home. However, Jack will undoubtedly face even more obstacles once he gets there. The rumors indicate that Jack will return to Genoa City with quite a tale to tell about being kidnapped by Kelly and Victor, but it’s doubtful that his family will believe his story. After all, Stitch (Sean Carrigan) retrieved Kelly’s ashes and they’ve all been interacting with a man who looks and sounds just like Jack. It seems the real Jack might be pegged as the impostor. Naturally, Jack’s newfound freedom will throw Victor (Eric Braeden) for a loop. As this storyline heats up, we have to wonder how Jack’s return was set in motion.

In Thursday’s episode of “The Young and the Restless,” Jack woke up with blood on his hands. Jack was confused as he looked over at a dead-as-a-doornail Kelly. We didn’t see Jack do the deed and in the soap world, that likely means he’s innocent. If Jack didn’t kill Kelly, then who did? Let’s examine our options. There are really only two people who were aware of Kelly’s location and had the means to take her out: Victor and fake Jack. Victor wants to keep Jack out of the picture and Kelly was helping him do that. Based on Y&R previews for Friday, Victor will be genuinely shocked by the news that Kelly is dead and Jack is free. It seems we can count Victor out as the mastermind of Kelly’s murder. That just leaves fake Jack, who we now know is an infamous drug lord named Marco Anacelli. Fake Jack has connections and could’ve easily sent someone to kill Kelly so Jack could escape. Why would fake Jack want to do that, you ask? Maybe it’s because the walls are closing in.

Fake Jack knows his DNA was found on the envelope Fenmore (Max Ehrich) handed over to the police. That’s probably why it mysteriously wasn’t a match anymore. Jack’s doppelganger is a resourceful guy and he could be covering his tracks. Even with the change in evidence, fake Jack knows the cops are hot on his trail. Perhaps the plan is to bring the real Jack back into play and pin the murders on him. Plus, fake Jack is tired of Victor breathing down his neck. By sending someone to kill Kelly, the impostor would make Victor lose most of his leverage and he’d divert suspicion onto the real Jack. When fake Jack claims to be the real deal, Kelly won’t be around to tell anyone otherwise – and certainly Victor can’t and remain a free man!

Unfortunately for the doppelganger, there’s one person who will definitely know the difference. Gabriel (Justin Hartley) could blow all of this wide open. Unlike the impostor, Jack knows that Gabriel is actually Adam. Will Adam allow his secret to be revealed so everyone can learn which Jack is telling the truth? Time will tell, but there’s a good possibility that Adam will save the day. Stick with “The Young and the Restless” to watch the fake Jack storyline and the cabin-killer mystery collide.

So Y&R fans, what do you think about the idea that fake Jack could be trying to set up the real Jack? Does the impostor plan on Jack taking the fall for Austin (Matthew Atkinson) and Courtney’s (Kelli Goss) murders? When Jack returns and gives updates on what happened, will anyone other than Adam believe him? Could Adam sacrifice his secret to help Jack? Let us know what you think in the comments below and don’t forget to check CDL tomorrow for the latest “Young and the Restless” spoilers, rumors, updates and news.