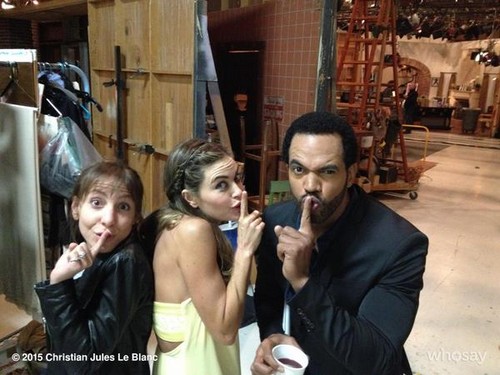 “The Young and the Restless” spoilers for Tuesday, April 7, hint that several plans will go awry in Genoa City. Dylan (Steve Burton) will interrogate Sharon (Sharon Case) about where she was earlier and he’ll notify her of Courtney’s (Kelli Goss) murder. It seems the ‘other’ driver threw something out of the car the night Austin (Matthew Atkinson) was killed. Sharon will tell Dylan that she went to look for whatever it was, but came up empty-handed. Dylan will imply that this looks bad, but Sharon will insist she is innocent. Sharon will suggest that Dylan could find what the driver threw out, but he’ll claim it’s like finding a needle in a haystack.

When Paul (Doug Davidson) shows up at the cabin, the gang will tell him the whole story of Austin’s murder and the events that followed. Paul will be angry that they didn’t give him the news from the get-go. They’ll make their way to the police station where Paul will question everyone in private. Kevin (Greg Rikaart) will tell Paul about the documentary Austin was making and how someone didn’t want the information to get out. Stitch (Sean Carrigan) will talk about getting involved after Abby (Melissa Ordway) got mugged.

Kyle (Lachlan Buchanan) will share his story of going to the cabin to tell Summer (Hunter King) that Austin was cheating on her, but he’ll be quick to add he didn’t kill him. Kyle will also bring up Sharon’s motive for taking Austin out. Mariah (Camryn Grimes) will defend Sharon and maintain that Victor (Eric Braeden) and Nick (Joshua Morrow) would have more to lose if the dirt Austin had was exposed. When Paul asks Noah what he thinks, he’ll say that Dylan is in on all this and he could be the guilty party. They might as well throw Dylan in the mix. Sheesh. The suspect list is getting out of control.

Other “Young and the Restless” spoilers tease that Sage (Kelly Sullivan) and Chelsea (Melissa Claire Egan) will bicker about Gabriel/Adam (Justin Hartley). Sage will indicate that Gabriel has been playing her and he’s not really interested in the money or anything else for that matter. All Gabe wants is Chelsea’s love. Of course, Chelsea won’t believe that Gabe would dupe her like that. Chelsea will finally get fed up with all of Sage’s hints and ask her to come right out and say it. Sage will start to spill the beans, but she’ll be interrupted by the doorbell. Chelsea will get the flowers Gabriel sent along with the card that says “Why would you settle for anything less?” Sage will tell Chelsea she can get to the bottom of things by asking if Gabe knew her dead husband.

Later, Chelsea will tell Gabriel she knows all about his scheme and he’ll realize that Sage has tipped her off. Chelsea will ask if Gabe knew Adam and he’ll say that he knew he wanted to be with Chelsea when he first came to Genoa City. Gabriel will say that he longed to be the kind of man she could never stop loving so he researched Adam. Now Gabe knows him better than he knows himself. Chelsea will be infuriated that he manipulated her and she’ll shout “Stay away from me!” It looks like Adam’s plan has backfired, but the rumors say there’s still hope for Adam and Chelsea’s reconciliation.

Dylan will go out in the middle of nowhere to look for what Sharon said the other driver threw out. In a wooded area, Dylan will spot a tire iron and pick it up carefully with a cloth. Has Dylan found a murder weapon? Paul will call him to the station because he knows Dylan has information on Austin’s murder. This storyline is just heating up so stick with CDL for Y&R updates as Paul tries to uncover the truth.