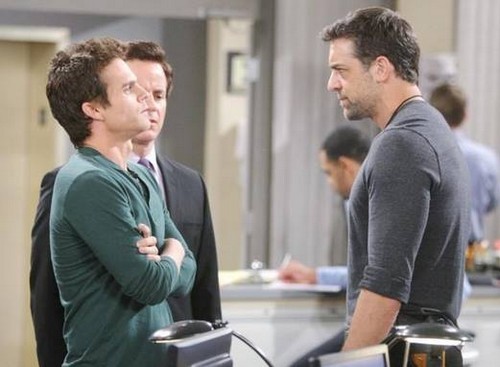 “The Young and the Restless” spoilers tease that the Austin’s (Matthew Atkinson) murder will continue to cause chaos in Genoa City. Austin was killed that stormy night at the cabin and the finger pointing immediately began. Right now the gang seems to be stuck on the idea that Sharon (Sharon Case) or Nick (Joshua Morrow) did the deed, but there’s another suspect that hasn’t been mentioned yet. Detective Mark Harding (Chris McKenna) hasn’t been around lately and it’s possible that he’s laying low because he’s the one who murdered Austin. After all, Harding was nowhere to be seen throughout Neil (Kristoff St. John) and Nikki’s (Melody Thomas Scott) ordeal.

Since Detective Harding has a background as a cop, he knows the ins and outs of an investigation. Harding would know how to cover his tracks and place suspicion elsewhere. As far as the lipstick messages, Harding could be using them to make everyone think that the killer is a woman. Plus, Harding most likely has experience following criminals and that would make it easy to watch the cabin crew’s every move.

“The Young and the Restless” fans know that Detective Harding certainly wasn’t a fan of Austin. When Austin shot Paul (Doug Davidson), Harding wanted to lock him up and throw away the key. Harding wasn’t too fond of Courtney (Kelli Goss) or Kevin (Greg Rikaart) either. After Abby (Melissa Ordway) snubbed her nose at him at the New Year’s Eve party, Harding probably wouldn’t have an issue with knocking her in the head to keep her quiet.

Detective Harding has always been a shady Y&R character. We really don’t know much about his personal life or what dirty little secrets he might have. It’s very possible that Harding delivered the fatal blow to Austin’s head. Unlike a lot of the female suspects in this storyline, Harding would have had the strength to move Austin’s body and stuff him in the closet. “The Young and the Restless” rumors say that the cabin killer could strike again so stick with CDL for updates as the mystery continues to unravel.

So Y&R fans, what do you think about the news that Detective Mark Harding could be the cabin killer? Do you think Harding wanted to keep something in the documentary a secret or did he simply hate Austin enough to kill him? Since we really don’t know much about him, could Detective Harding just be a psycho? Do you have another suspect in mind for Austin’s murder? Let us know what you think in the comments below and don’t forget to check CDL tomorrow for the latest “Young and the Restless” spoilers, rumors, updates and news.