‘The Young and the Restless’ Spoilers: Does Victor Frame Jack for Kelly’s Murder – Fingerprints File Related?

BY Janette E Smith on April 7, 2015 | Comments: one comment
Related : Soap Opera, Spoiler, Television, The Young and the Restless 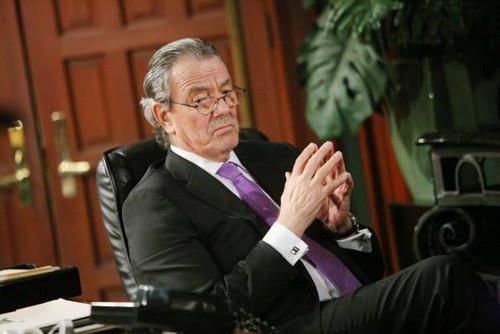 “The Young and the Restless” spoilers tease that Victor’s (Eric Braeden) plan could destroy Jack (Peter Bergman) and everything he’s worked for. We don’t know for sure what Victor has up his sleeve, but the sheet of fingerprints snatched in the confessional may provide a key clue. When Nikki (Melody Thomas Scott) intercepted the information meant for the confessional occupant, she confronted Victor about what he had planned. Victor claimed that his company had a security breach just like Jabot and those fingerprints could help catch the hacker, but “Young and the Restless” fans know better than that. The fingerprints are somehow tied to Victor’s scheme to bring down Jack.

One possibility is that Victor intends on making it look as if Jack murdered Kelly (Cady McClain). Perhaps the fingerprints are Jack’s and Victor plans on having them planted at the scene where Kelly supposedly overdosed. Then again, the rumors say that Kelly is alive and intends on stopping Jack’s marriage to Phyllis. If that’s the case, maybe the fingerprints will come into play later. After all, Victor said he would help Kelly for a price.

Maybe Victor will ditch the staging and really have Kelly taken out the second time around. If Jack’s fingerprints were planted at the scene then, he’d have the perfect motive for killing Kelly. It would look like Jack murdered his ex in a fit of rage for showing up and ruining his chance at happiness with Phyllis. By the time all of this is over, Jack could end up facing trial for murder. Jack can’t exactly run Jabot from prison. Victor could easily swoop in and take over the company. Victor would get what he wanted (as usual) and Jack’s life would be completely ruined. “The Young and the Restless” viewers know Victor’s classic win-lose scenario all too well.

Whatever Victor has planned, it has to be big. Victor is putting his heart and soul into his latest plot. By the time he’s through, you can bet that Kelly, Jack and anyone else involved will wish they’d never crossed paths with Victor. Stick with CDL for Y&R updates as Victor’s plan moves forward.

So Y&R fans, what do you think about the idea that Victor could try to frame Jack for Kelly’s murder? Do you think those are Jack’s fingerprints? Will Victor’s scheme mean bad news for anyone who tries to stand in his way? Let us know what you think in the comments below and don’t forget to check CDL tomorrow for the latest “Young and the Restless” spoilers, rumors, updates and news.