‘The Young and the Restless’ Spoilers: Sharon Threatens To Expose Nick as a Murderer – Avery Suspects Gabriel, Adam Messed Up! 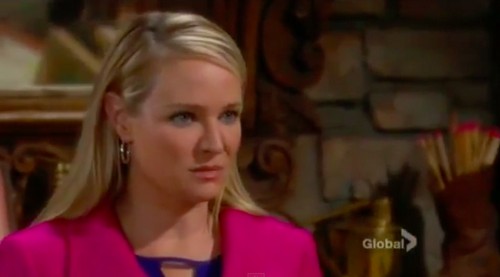 “The Young and the Restless” spoilers for Friday, March 27, hint that several secrets will start to unravel in Genoa City. Stitch (Sean Carrigan) will try to drink away the pain of losing Kelly (Cady McClain), but Abby (Melissa Ordway) will convince him to sober up. When Abby offers to help him shower, Stitch will tell her that the last time someone helped him he cheated on Victoria (Amelia Heinle). Abby will press Stitch to tell her who it was and he’ll admit that it was Ashley (Eileen Davidson). Stitch will defend himself by saying it was just a one-time thing and he’ll tell Abby to keep it a secret. The rumors say that Stitch and Abby are headed to bed soon so you can bet that things are going to get complicated.

Meanwhile, Gabriel/Adam (Justin Hartley) will see Nick (Joshua Morrow) and he’ll bring up the fact Nick slept with Sage (Kelly Sullivan). Gabe will tell Nick that he doesn’t care what Sage does, but she’ll need to be discreet so they don’t lose the money. Avery (Jessica Collins) will show up and Nick will introduce her to Gabriel. Avery will bring up the “Better Days Foundation” and Gabe will say he’d love to make a donation. Avery will say that it’s his family’s cause and Adam will try to cover up the confusion by saying he deals with a lot of charities. When Avery asks for his signature, Gabe will look at the information and pretend to remember. Avery and Nick will wonder why Gabe would be so quick to sign papers from someone he just met. Back at her office, Avery will compare Gabriel’s signature on a previous document with the new one. They won’t match up. Uh-oh. It looks like Adam’s scheme could be headed for trouble.

Other “Young and the Restless” spoilers tease that Chelsea (Melissa Claire Egan) will light up as she talks about her marriage to Adam. Sage will comment that Chelsea doesn’t glow like that when she talks about Billy. Chelsea will confess that there’s something inside her that won’t let her commit and she’ll wonder if marrying Billy might be a mistake. Later, Adam will talk with Sage and beg her to continue helping him.

The cabin crew will have yet another debate about who’s responsible for killing Austin (Matthew Atkinson) and leaving the threatening messages. Kevin (Greg Rikaart) will decrypt the files with Sharon’s (Sharon Case) interview and the gang will watch as Sharon discusses the Newman family’s dirty dealings. Sharon will say that Victor (Eric Braeden) paid to cover up a major crime that was committed by Nick. It seems the video gives Sharon an awfully good motive, but it gives Victor and Nick one, too. Summer (Hunter King) will argue that Victor and Nick were at The Underground that night, but Mariah (Camryn Grimes) will say that they could have easily paid someone to do the deed.

Dylan (Steve Burton) will tell Noah (Robert Adamson) that he doesn’t think Sharon is off her meds, but they should call the police. Noah will say they shouldn’t and note that Abby has also received threatening messages. When Noah returns to the rest of the group, Kyle (Lachlan Buchanan) will admit that he wrote the message on Sharon’s mirror to ferret her out. Noah will punch Kyle for putting his mother through that. It looks like the suspect list just keeps growing so stick with CDL for updates as this exciting storyline moves forward.

Sharon will call Nick a hypocrite and say that he’s always interfering in her life. Nick will remind her that he has a right to protect his daughter since a court ordered it. Sharon will angrily reply that she’s not crazy, but her erratic behavior will concern Nick. When Nick says that he won’t allow Sharon to be around Faith (Aly Lind), Sharon will threaten to tell the whole world the secret of how he “broke that girl’s neck.” Stay tuned to Y&R to see how long it takes the news to get out.