‘The Young and the Restless’ Spoilers: Ashley The Secret Confessional Occupant – Collaborating with Victor? 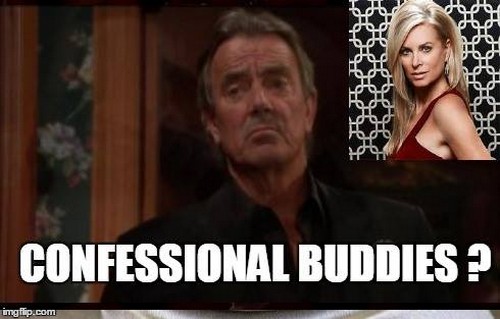 “The Young and the Restless” spoilers hint that Victor (Eric Braeden) will soon enter the next phase of his plan to destroy Jack (Peter Bergman). However, Y&R viewers know he’s not in this alone. Someone’s been listening to Victor give updates on the scheme, but we don’t know the identity of the confessional occupant just yet. There have been some interesting theories out there. Some say Kyle (Lachlan Buchanan) could be the one in cahoots with Victor. Others say it may be a Genoa City resident of the past, like Maureen (Meredith Baxter). The latest rumors indicate that Ashley Abbott (Eileen Davidson) might be the mysterious figure in the booth. Now before you shoot down the possibility, let’s take a moment to consider why Ashley might be willing to work with the enemy.

“The Young and the Restless” fans are aware of Ashley’s devotion to Jabot. Ashley could’ve teamed up with Victor to gain control of the company from Jack. With power dangling just within reach, it’s possible that Ashley wants to grab it while she has the chance. Ashley’s not shy about discussing how much she hates Victor, but is it just for show? Perhaps Ashley’s been laying it on a little thick to cover her tracks. Plus, there’s the issue of Ashley’s sudden concern for Phyllis (Gina Tognoni).

Ashley conveniently spotted Jack and Kelly (Cady McClain) emerging from the storage closet at The Underground and she was more than happy to share the news. Maybe playing nice with Phyllis is part of Ashley’s deal with Victor. Then again, the objective might be to keep Jack’s life in turmoil so he never sees Victor and Ashley coming. Phyllis and Kelly’s constant feuding could provide an excellent distraction.

“The Young and the Restless” promos have been telling viewers to expect the unexpected. The revelation that Ashley is working with Victor could be one of the many surprises Y&R has in store. After all, enemies can unite when they have a common goal in mind. It would certainly be a fun twist if Ashley joined the dark side. With an Abbott on his team, Victor might be unstoppable. Stick with “The Young and the Restless” to find out the identity of the Victor’s partner-in-crime.

So Y&R fans, who do you think has been listening to Victor in the confessional? Could Ashley be a contender or is another Y&R character at the top of your suspect list? Let us know what you think in the comments below and don’t forget to check CDL tomorrow for the latest “Young and the Restless” spoilers, rumors, updates and news.