‘The Young and the Restless’ Spoilers: Gabriel Tells Chelsea Adam’s Here – Stitch Lashes Out at Victoria Over Kelly’s Death 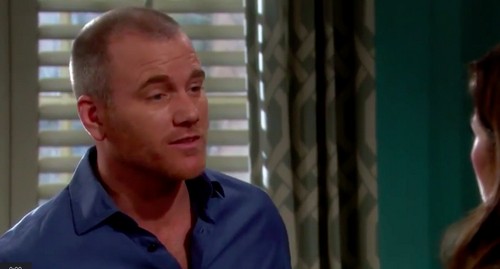 “The Young and the Restless” spoilers for Wednesday, March 25, hint that old romances may begin to rekindle in Genoa City. Victoria (Amelia Heinle) and Nick (Joshua Morrow) will talk about the repairs at The Underground as well as their suspicions about Victor (Eric Braeden). Nick will indicate that it’s just the same old, same old. However, Victoria will believe that this time it’s different. Something’s definitely up. Victoria will tell Nick that after the big announcement about the new fragrance and the launch of Brash and Sassy, Victor pulled the plug with no warning. Victoria will also mention that Victor wants her to look into Jabot’s weaknesses.

At the athletic club, Jack (Peter Bergman) will talk with Phyllis (Gina Tognoni) about Kelly’s (Cady McClain) suicide. Jack won’t be able to stop thinking about how hopeless Kelly felt if she was willing to take her own life. When Stitch (Sean Carrigan) comes in with Abby (Melissa Ordway), Jack will give them the news that Kelly is dead.

When Stitch gets updates on how it happened, he’ll say that Kelly would never kill herself. Phyllis will show Stitch the picture of Kelly’s body and Jack will say that it was an overdose of barbiturates. Stitch will suggest it could’ve been an accident, but Jack will indicate that there was a note and he’s sorry about what happened. Stitch will angrily ask him if that’s all he has to say and shout that Jack drove Kelly to her death. Jack will try to tell Stitch that there was a time when Kelly meant a great deal to him, but Stitch will cut him off.

Victoria will arrive and say that she knew Kelly was in trouble, but she had no idea it was this bad. Stitch will be outraged that everyone keeps blaming Kelly when she was the one who was always exploited. Victoria will reply that she wouldn’t blame Kelly and that she knows how much Kelly meant to Stitch. Stitch will tell her to stop because he knows how Victoria really felt about Kelly. Victoria will run out of the room and Abby will follow. Abby will tell Victoria that Stitch just needs some time. When Abby returns to Stitch, Victoria will watch nearby. Stitch will tell Abby that he wants to be alone, but she’ll remind him that he’s her bodyguard. Stitch will say he wishes Kelly had never met any of the Abbotts and he’ll wonder why Kelly wouldn’t have come to him for help. Ashley (Eileen Davidson) will watch Abby and Stitch leave together.

At the Abbott house, Phyllis will be upset that Stitch blamed them when it was Kelly’s fault. Jack will pipe up that it was really his fault. The pair will bicker about it until Phyllis can’t take it anymore. Phyllis will say that if she hears Jack blame himself one more time, then she’ll walk out the door. Jack will say that it broke his heart the last time Phyllis left and he’ll beg her not to do it again. Jack will tell Phyllis that he doesn’t want her to think his heart isn’t with her.

Other “Young and the Restless” spoilers for Wednesday, March 25, tease that Chelsea (Melissa Claire Egan) will mention she’s going to see a buyer. Gabriel/Adam (Justin Hartley) will tell her he knows the guy and they should team up. Sage (Kelly Sullivan) will say she doesn’t think Gabriel should horn in on Chelsea’s meeting. Gabe will insist that they have the same goals and he can help Chelsea. Chelsea will say it sounds reasonable and leave the room to get her portfolio. Sage will say that it’s sad that Adam has to trick Chelsea.

Adam will ask if Sage just expects him to watch Billy (Burgess Jenkins) marry Chelsea. Sage will remind him that Adam Newman is legally dead. Adam will say he’s Gabriel Bingham and Sage will snap back that he’s not even close. Sage will say that it kills her when Adam calls himself Gabriel. Adam will reply that he’s sick of hearing about the glories of “St. Gabriel.” Gabriel’s dead and gone. Sage will slap Adam and he’ll tell her that she knew his agenda when they agreed he would take Gabe’s place. Sage will say that Adam’s a coward who couldn’t even take responsibility for killing a little girl. Adam will tell Sage that her husband’s never coming back and he never loved her. Sage will go see Nick at The Underground and she’ll say she’s sorry she married Gabriel for the inheritance. Nick and Sage will drink shots, dance and kiss.

At Jabot, Billy and Ashley will discuss the success of Hex. The conversation will turn Billy and Chelsea’s appointment to look at a wedding venue. Ashley will say she thinks Billy is rushing things in an effort to put Victoria behind him. Chelsea will show up and say she thought the appointment had been postponed. Billy will be unpleasantly surprised to hear that Chelsea and Gabe are going on a road trip to see a buyer. Later, Billy will talk with Victoria about Kelly’s death and how hard Stitch is taking it. Victoria will say that she doesn’t know how to comfort Stitch just like she didn’t know how to comfort Billy when Delia (Sophie Pollono) died. Victoria will add that she can’t talk to Stitch like she can talk to Billy. When Victoria comments that she’s still trying to figure out how she and Stitch fit together, Billy will say he feels the same way with Chelsea.

When Gabriel and Chelsea get on the road, Gabe will pull over and say there’s something wrong with the gas gauge. Gabriel will say the car is out of fuel, but the auto club will send a new one for them. Gabriel will pull out some energy bars and Chelsea will comment that Adam used to be addicted to that brand. Chelsea will talk about how beautiful and peaceful it is in the middle of nowhere. It will remind Chelsea of being in Kansas when she married Adam for the first time.

Chelsea will talk about how she felt loved and protected by Adam. Chelsea never doubted that she and Connor (Michael and Nolan Webb) were everything to him. As for her relationship with Billy, Chelsea will say she knows Adam wouldn’t approve and she almost feels like she’s cheating on him. When Chelsea says that she still feels like Adam is watching, Gabe will say “He is here.” Y&R rumors say the big reveal is coming up soon so stick with Celeb Dirty Laundry for updates on how Gabriel’s true identity will come out.