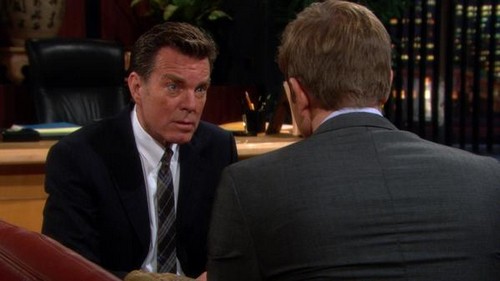 “The Young and the Restless” spoilers for Tuesday, March 31, tease that the stakes will be raised for several Genoa City residents. As Sharon (Sharon Case) rests easy knowing Faith (Aly Lind) won’t be taken away, Nick (Joshua Morrow) will confront Victor (Eric Braeden) about paying off Sondra Allen’s family. Victor will argue that he helped Sondra and he was protecting Nick’s future. Nick will tell Victor that Sharon was there that night and now she’ll always have this to hold over his head. Victor will offer to handle Sharon, but Nick will indicate that he’s done enough.

When Nick sees Sage (Kelly Sullivan), he’ll snap at her and imply that she’s just after his money. Nick will eventually apologize and Sage will tell him that he can trust her. The rumors say Nick’s secret will continue to make waves in the coming weeks so Y&R fans will want to stay tuned.

Other “Young and the Restless” spoilers hint that Victoria (Amelia Heinle) will congratulate Billy (Burgess Jenkins) and Chelsea (Melissa Claire Egan) on the news of their engagement. Later, Nikki (Melody Thomas Scott) will indicate that it was gracious of her, but Victoria will admit that Billy’s engagement bothers her. The conversation will turn to Victor’s latest quest for Jabot and Nikki will be concerned about how far he’s willing to go to get what he wants.

It sounds like Nikki has a good reason to be worried. Victor intends on destroying Jack (Peter Bergman) and he’s not about to let anyone stand in his way. Victor will call his partner-in-crime and indicate that he’ll leave some information for him or her in the usual place. Nikki will follow Victor and pick up the envelope he leaves in the confessional. It will contain a sheet of paper with fingerprints. It’s safe to say Victor won’t be pleased when he gets updates on Nikki’s interference.

Meanwhile, Gabriel/Adam (Justin Hartley) will tell Billy and Chelsea that someone hacked into Jabot’s mainframe. Some of Chelsea’s designs were stolen and Gabe will think Victoria knows who’s responsible for the security breach. Billy won’t believe that Victoria would play a part in harming his family. When Billy leaves, Gabriel will talk about the complicated relationship between his father and Victor. Gabe will also mention how quickly Billy came to Victoria’s defense. We all know Adam never misses an opportunity to take a dig at Billy. Victoria and Billy will discuss the possibility that Victor was involved in hacking into Jabot and they’ll get a little flirty as Chelsea appears. Back with Adam, he’ll go to Jack’s office to fill him in on the crisis, but Victor will surprise him as he turns around in Jack’s chair.

Dylan (Steve Burton) will inform the cabin crew that Abby (Melissa Ordway) told him the whole story. When he brings up the threatening message on Sharon’s mirror, Noah (Robert Adamson) will say that Kyle (Lachlan Buchanan) admitted to writing it. Dylan will be furious and want to know what Kyle was thinking. The gang will once again debate who the killer might be. Dylan will warn them that someone could get hurt if they don’t back off and let him take care of it. Later, Kyle will confess to Summer (Hunter King) that she’s the reason he came back to town and he’ll keep her safe. Love will also be in the air for two other Genoa City residents. Noah will propose to Courtney (Kelli Goss) and she’ll happily accept.

Nick will grudgingly drop off Faith with Sharon and he’ll say he’s considering going to the authorities. Sharon will warn him not to open up a can of worms. After Nick heads out, Dylan will play a game with Faith while Sharon bakes cookies. Something in the game will cause Faith to remember when her mom drove their car through the woods. When Dylan questions her, Faith will tell him that it was the night their car slid off the road. It appears Sharon may not be telling the whole truth about what happened during the Valentine’s Day storm.