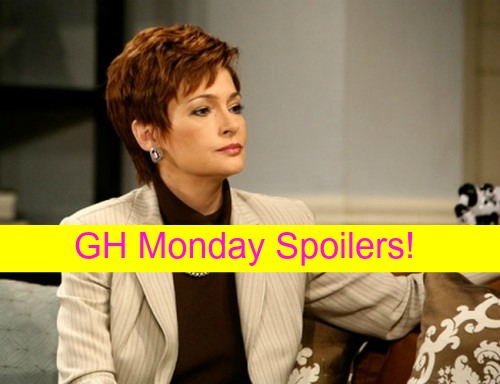 Check out these “General Hospital” spoilers for the Monday, October 26 show. On Monday, three Port Charles liars keep on lying and the trouble keeps mounting. Liar number one is Dante Falconeri (Dominic Zamprogna).

He’s still lying to his loving wife Lulu Spencer (Emme Rylan) about his one night stand with Valerie Spencer (Brytni Sarpi). Dante, like the other two liars, is in denial and somehow hoping the truth of what he’s done will not come out. Trust us, it will, and he will be the first of the three big fibbers to get his just desserts.

On Monday, though, Dante is still in the fib zone as he and Lulu head to see her OB/GYN to talk about having their embryo implanted. They are hoping to implant soon after the Halloween party, but get some information that may alter their timeline and have to do the embryo deed sooner rather than later. They will do as the doctor suggests, but this may all be moot by the end of the week!

Liar number two is Sabrina Santiago (Teresa Castillo). Turns out Sabrina has known for months she was pregnant and she and Michael Quartermaine (Chad Duell) haven’t been together that long. But Sabrina lets Michael tell his parents Sonny Corinthos (Maurice Benard) and Carly Corinthos (Laura Wright) that they are having a baby. Now she’s entrenched in the lie and it won’t be easy to come clean later.

And to make matters worse, Felix DuBois (Marc Samuel) seems to know she’s hiding something. Things will only get harder for Sabrina when Sonny tells Michael that he has to marry Sabrina ASAP and Michael will likely concur. Sabrina tells Carly this wasn’t planned and she knows the timing isn’t great but Carly will tell her the more the merrier and that Michael will be a wonderful father.

And even if Jake has given up hope on finding his identity, Sam Morgan (Kelly Monaco) has not although it’s got her and her – literal – partner in crime Damien Spinelli (Bradford Anderson) in hot water. The Jackal got busted thanks to Dr Obrecht (Kathleen Gati) and hauled out of Sam’s place in cuffs. Sam keeps a cool head, though, and does the smart thing.

Sam calls in uber-lawyer Diane Miller (Carolyn Hennessy) who takes the case but lets Sam have it for getting her sweet Jackal thrown in jail. Diane will be able to get him out and the Jackal will get right back to work on the Jake identity search. Despite his arrest (or perhaps because of it), Damien is more determined than ever to discover the amnesiac’s true identity.

Sam reassures Jake that they’re still on the case, but what happened to the data dump and hard drive wipe that Spinelli did right when the cops showed up? Is that the end of the pilfered laptop data and the medical records they hacked? No way. The Jackal always has a back-up plan. Did he stash the data on a flash drive and stick it under Sam’s table? No doubt he still has the goods somewhere…

These storylines make big moves on Monday and we can’t wait to see Carolyn Hennessy back on the small screen for a little Diane-Jackal bonding. Watch Monday’s show them come back to CDL for more detailed daily “General Hospital” spoilers, casting news and more!