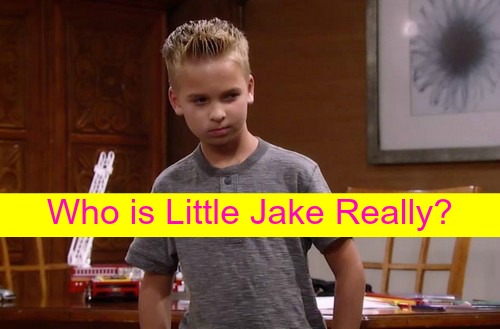 These “General Hospital” (GH) spoilers for the October 23 show will get you ready for Big Jake and Little Jake news plus questions about Carlos – all this and more on the Friday cliffhanger show. In Little Jake Spencer (James Nigbor) news, it looks like right after he was “rescued” from Cassadine Island, a DNA test was run against Jake Doe’s (Billy Miller) DNA.

This is something Damien Spinelli (Bradford Anderson) will discover when he’s poking around the GH server looking at medical records. Looks like when little Jake’s blood was drawn to check his health, it was illicitly used for a DNA test. This indicates that Nikolas Cassadine (Tyler Christopher) wasn’t sure that little Jake was legit. We know for certain that Nikolas knew who big Jake was, so Nik was investigating little Jake. That’s interesting.

Also, Laura Spencer (Genie Francis) hears a scream as she’s getting ready for bed and runs to see what’s going on. Is she at Wyndemere and hears Hayden Barnes (Rebecca Budig) implementing part of her revenge scheme against Nikolas? Or is Laura at Liz Webber’s (Rebecca Budig) place and it’s little Jake she hears? 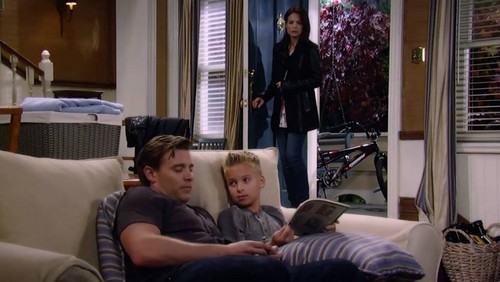 Either way, Laura will become very concerned about what’s going on with little Jake. Laura wants Liz to take him to see Dr Kevin Collins (Jon Lindstrom), but Liz is resistant. She’s got too much going on with her scam against Jason and wedding to do the right thing for her child. Shame, shame, shame.

Sam Morgan (Kelly Monaco) is oblivious that she’s helping her husband search for his identity and tells Patrick Drake (Jason Thompson) she loves and appreciates how he lets her do her own thing.

Jake stops by to see Carly Corinthos (Laura Wright) and tells her that Sam and Spinelli are helping him investigate his past. Carly will tell him that Spinelli has mad skills but Jake says they aren’t making any progress and he’s not feeling optimistic about getting answers.

Will Jake also share that Liz asked him to stop the search? Carly offers Jake an alternate outlook – she says he can stop chasing his past and instead embrace his future. Not that Carly is a huge fan of Liz’s, but she does appreciate that Liz and Jake love one another.

Liz is distracted by her concern that Jake’s investigation will render fruit and that he’ll find out that he’s already married before she can get him down the aisle. But Liz is pleasantly surprised when her fellow General Hospital doctors and nurses throw her a surprise wedding shower.

Liz will enjoy the shower, but will awkward questions remind her that her big day is overshadowed by her terrible lies to Jake about his identity? Good thing Liz is a master at mental compartmentalization. She’ll just block out the negative, paste on a smile, and hope for the best outcome for her.

On the Carlos Rivera (Jeffrey Vincent Parise) front, two women have questions about Carlos’s death – one who loved him and one who hated him – Anna Devane (Finola Hughes) and Sabrina Santiago (Teresa Castillo). Sabrina goes to see Paul Hornsby (Richard Burgi) and asks what he’s done with Carlos’s body.

And Anna goes to Jordan Ashford (Vinessa Antoine) and asks to see Carlos’s body. Anna will recognize that the wounds on the harbor body are inconsistent with where she shot Carlos, but what can Anna say? She can’t chime in: “That’s not him – I shot him five times in the chest…”

Also in the Carlos story, Michael Quartermaine (Chad Duell) fills Sonny Corinthos (Maurice Benard) in on the latest news and tells him the PCPD suspects that Sonny ordered Carlos’s shooting. He’ll tell his dad he was questioned but they didn’t get anything from him.

Michael will also share the Sabrina baby news to cheer up his dad. Also, does anyone think that for one second Michael is going to do what his dad said and stay away from the Corinthos syndicate business? Look for Michael to start giving orders to Max Giambetti (Derk Cheetwood) and making a power play.

Also, speaking of mob business, Paul wants Julian Jerome (William deVry) to join him and Ava Jerome (Maura West) in their criminal enterprise. This is a problem because Julian just insisted to Olivia Falconeri (Lisa LoCicero) that he’s out of the mob for good and just worked out a custody bargain.

How will Paul be able to leverage Julian to get back into the business knowing access to his son is at risk? It doesn’t seem likely – Paul will likely have to use Ava to do his dirty work on this front. The mob stuff is finally getting really interesting!

Don’t miss a moment of cliffhanger Friday! Then be sure to check back with CDL for tons more “General Hospital” spoilers including a look ahead at next week plus detailed daily spoilers.