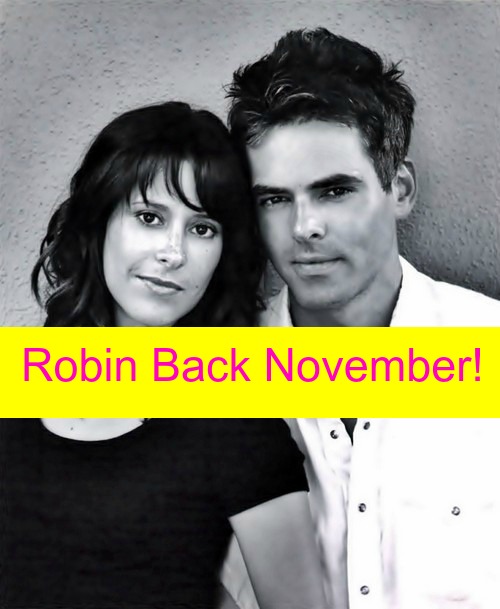 “General Hospital” (GH) spoilers tease that Robin Scorpio-Drake is returning to GH in November, and Kimberly McCullough has signed on for another brief stint in Port Charles. The news of Robin’s November Sweeps return comes the same week that news broke that Jason Thompson was exiting – and GH fans are certain that it can’t be a mere coincidence. Will we finally get the “Scrubs” reunion that we have been waiting years for?

“General Hospital” spoilers tease that the month of November will be huge in Port Charles, and we already have confirmed that we will finally get to see the big Jason Morgan reveal. There is a good chance that Robin’s return will tie in to that storyline, and she might even help Spinelli and Sam get to the bottom of the Jake Doe case that they have been working on.

Also, GH rumors have been indicating that there may be a JaSam reunion during November – which would mean that Patrick Drake will be single and dumped – once again. So, it seems fitting that Robin will be in town briefly, before she rides off in to the sunset again.

With Robin and Patrick both single again and the Jason Morgan case wrapped up, the former super couple might finally get back together … and get the happily ever after that GH fans have desperately wanted for them, before they leave Port Charles for good.

What do you think GH fans? Are you as excited as we are to have Kimberly McCullough back in Port Charles? Her stay will only be brief – when she leaves town will she be taking Jason Thompson’s character Patrick Drake with her? What does this all mean for their adorable daughter Emma, is she leaving the canvas as well? Share your thoughts in the comments below and don’t forget to check CDL tomorrow for more “General Hospital” spoilers and news!