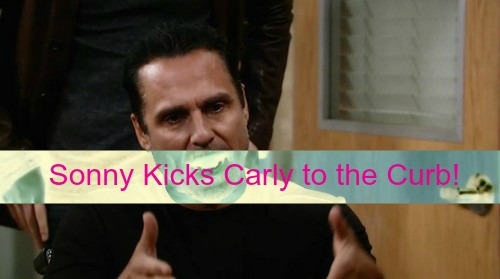 Check out these “General Hospital” spoilers for the Thursday, October 22 show. Time is running out for Liz, Dante, Olivia and all the other GH liars in Port Charles. Lulu Spencer (Emme Rylan) is oblivious to Dante Falconeri’s (Dominic Zamprogna) lies about his fidelity and happily tells her mom that she and Dante are ready to expand their family.

Laura Spencer (Genie Francis) is thrilled to hear the news. Lulu shares the update the she’s been cleared to implant the embryo which is safe in cold storage and that she’s planning on trying for the implantation after the Halloween party at The Haunted Star.

Nikolas Cassadine (Tyler Christopher) – the biggest liar in Port Charles right now, aside from Paul Hornsby (Richard Burgi) – runs into his mom and sister and chats them up. Lulu can’t help but notice that her mother is giving Nikolas the evil eye and wonders what’s up with that. It’s doubtful, though, that Laura will tell Lulu the Jake secret or that Nikolas will admit to it in front of her. Nikolas will make his excuses and leave.

Also tomorrow, Nikolas meets with fellow liar and schemer Liz Webber (Rebecca Herbst) to warn her that Jake Doe (Billy Miller) is close to learning the secret of his identity. Nik will tell her about Jake threatening him, the DNA test, and the laptop hack. Plus, there’s the troubling news that Sam Morgan (Kelly Monaco) and Damien Spinelli (Bradford Anderson) are working with Jake. Liz will freak out in a big way and go to Jake to ask him to drop this.

The very fact that Liz doesn’t want him digging into his past will leave Jake suspicious. Liz will make up some BS about loving him for who he is right now and not caring about who he was, but Jake smells a rat. Spinelli has made headway on the computer files – particularly on the DNA search – and knows that it wasn’t just an Interpol and law enforcement search as Nikolas claimed. Looks like Spinelli is close to uncovering the truth. Any day now…

Sonny Corinthos (Maurice Benard) lied to Morgan Corinthos (Bryan Craig) to try and get him to sneak him out of General Hospital but Carly Corinthos (Laura Wright) and Michael Quartermaine (Chad Duell) show up to shut it down. Michael tells Sonny firmly to man up and do the work to get better or he won’t be the man he was and won’t be any good for his family. Michael tells him he can’t take a shortcut on this one and needs to do the work.

Sonny is not pleased but Morgan is there and Michael and Carly too and all show unwavering support. Sonny will have to face the inevitable and crawl back to his hospital bed. He asks for the family to stand with him, but then it looks like his pride might get the better of him and Sonny orders Carly away. He feels like she betrayed him by talking with Patrick Drake (Jason Thompson) behind his back. Carly will be hurt. Also, notice that Michael is in black leather and looking like a thug?

Other PC liar Olivia Falconeri (Lisa LoCicero) is getting her comeuppance now that Julian Jerome (William deVry) knows she’s been keeping his son Leo away from him. Alexis Davis (Nancy Lee Grahn) came home and found Julian gone and knows that he’s confronting his baby mama. Alexis will race to the MetroCourt to try and keep things from turning ugly. It will be up to Alexis to broker the peace and explain to Olivia that Julian is really out of the mob and she’s facing fraud charges if they go to court.

Don’t miss a moment of Thursday’s actions then check back with CDL for tons of “General Hospital” spoilers for Friday’s cliffhanger show.