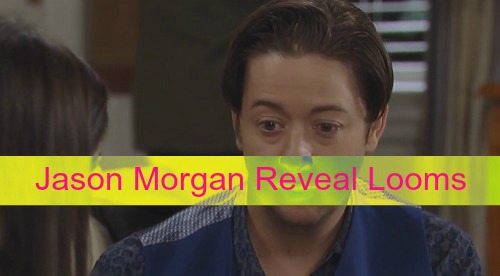 General Hospital spoilers reveal the details of Jake’s search for his identity and what GH fans can expect to see this week, October 19-23, as the Jason Morgan reveals approaches. In Webber/Spencer news, Laura Spencer (Genie Francis) begins to notice that something is off about the kid they brought back from Cassadine Island and tells Liz she’s worried about little Jake Spencer (James Nigbor).

Laura sees some behavioral concerns and will suggest Liz take him to see Dr Kevin Collins (Jon Lindstrom). Kevin will have a busy roster when he comes back – he needs to psychoanalyze little Jake, Hayden, Anna Devane (Finola Hughes) and maybe Kiki as well.

On Spoon Island, Jake Doe (Billy Miller) goes on the offensive against Nikolas Cassadine (Tyler Christopher) and tells him to hand over the information about his identity. What lie will Nikolas tell him to keep Jake from choking the life out of him? The DNA test was done around the time of the bombing so it may be motivated by Helena Cassadine’s (Constance Towers) plot, but whose DNA was Jake tested against? Could it be Danny? A Quartermaine?

Looks like Hayden Barnes (Rebecca Budig) has some semblance of her memory back, is plotting against Nikolas and has a partner in crime! Hayden just got the job she wanted at Nik’s new company and she’s planning on launching a major revenge initiative but then she softens.

Hayden will overhear Nikolas telling son Spencer Cassadine (Nicolas Bechtel) that he has feelings for her and Spencer will also tell his dad that he really likes her. Will Hayden choose love over revenge?

Damien Spinelli (Bradford Anderson) continues on with the Jake investigation and finds out some interesting things this week while digging into Jake’s past and Nikolas’s dealings. Jake fills Carly in on the investigation and how The Jackal and Sam are helping him sort out who he is. Carly is happy for him but Liz Webber (Rebecca Herbst) is not. Liz asks Jake to shut down this investigation completely. This will make Jake and Sam suspicious. Liz gets a surprise wedding shower from her pals at GH.

Alexis may have a new client in Brad Cooper (Parry Shen) who tells Alexis about his marriage to Rosalie Martinez (Linda Elena Tovar) and the crime that he was party to that has him tied to Rosalie indefinitely. Brad wants to find a way to protect himself from his legal issues while getting loose of Rosalie so he can marry his true love Lucas Jones (Ryan Carnes). If anyone can help, it’s Alexis, but will Rosalie consent to the divorce? Will this deal get Brad off the hook but leave Rosalie in hot water? She won’t like that.

There’s a bunch of movement this week on several major plotlines and the launch of a couple of new and exciting ones. Check back with CDL for detailed daily “General Hospital” spoilers and more!