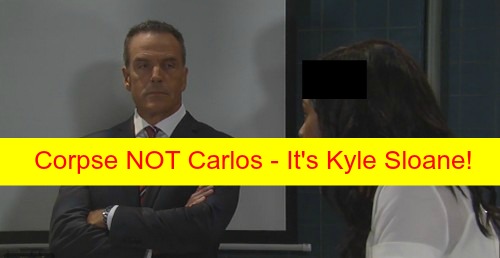 In this “General Hospital” spoilers, we delve into just whose body that was that bobbed up in Port Charles harbor last week – and we suspect it is NOT Carlos Rivera (Jeffrey Vincent Parise). We’re not saying that Carlos is out there somewhere living it up – we’re just stating that the fish-nibbled corpse that Maxie Jones (Kirsten Storms) spotted isn’t the Puerto Rican hit man and likely baby daddy of Sabrina Santiago (Teresa Castillo). What’s far more likely is that the body is that of Kyle Sloane (Robb Derringer)…

We noticed that the time of death was way off for the murder of Carlos. Anna Devane (Finola Hughes) shot Carlos back in May. After Paul Hornsby (Richard Burgi) intercepted the medical examiner’s report so he could read it before PCPD chief Jordan Ashford (Vinessa Antoine), he announced that the death was just a couple of weeks ago. This timing was perfect because it made Carlos culpable for shooting Sonny Corinthos (Maurice Benard) and then a Corinthos suspect for shooting Carlos in revenge.

The body can’t be Carlos unless Paul paid off the ME – which is unlikely. Instead, what’s highly probable is that the body is Sloane’s and Paul stashed Carlos’ wallet and ID on the body before he kicked it into the water.

Paul had the info to get into Sloane’s safety deposit box where Sloane stashed the gun and Carlos’ wallet for safe keeping. It would have been simple enough for Paul to make the swap. And with the fishes making food of the face of Sloane, he would not be easily recognizable.

The question is, will this ruse stick? Dental records won’t match, they don’t look to be the same height, plus Carlos is Latino. But if they rush through with a cremation, it could all go away. But would it be Sabrina in charge of making that decision?

Sabrina might want him sent back to Puerto Rico – or the Riveras might show up to claim him. Could we see Lily Rivera at long last? It’s improbable that this will work out perfectly, but with Paul and the fingers he has in so many pies, the plan might come together – at least for awhile.

This aligns with Paul sending texts to Anna using Sloane’s phone to make her believe that he’s still alive, just angry at her, so she won’t think for a moment that Sloane could be dead and therefore could be the body in the harbor. However, the wallet planted there may also be part of Paul’s plot to frame Anna for Sloane’s murder. By planting the wallet there, Paul could be laying the groundwork to set up Anna for the murder of both Carlos AND Sloane.

Here’s how that could go down. Paul knows all about Anna’s slaying of Carlos so he could say that Sloane came to him, confessed Anna’s involvement and that Sloane told him he was scared that Anna was going to kill him to protect her secret. Then, lo and behold, Sloane turns up dead with Carlos’ ID on him. Paul could say that Anna had motive in both killings and access to Carlos’ ID because she took it off his body after she shot him in cold blood.

Paul could also plant Sloane’s phone somewhere at Anna’s place and say she was texting herself to try and make it look like Sloane was still alive after she had shot him. It will be interesting to see how this all plays out. Paul has two stratagems working.

First, he wants Carlos declared dead to neatly tie up the Sonny shooting – which Paul himself is guilty of carrying out. But second, Sloane wants Anna to quit poking around his business. But it looks like these two can’t be carried out simultaneously.

More on Paul’s plot against Anna as it unfolds. Check back with CDL for more “General Hospital” spoilers, gossip and more!