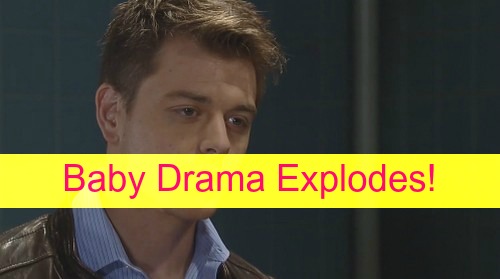 Check out these “General Hospital” spoilers for the week of Monday, October 19 through Friday, October 23. This week in Port Charles, we get closer to Jake’s reveal plus there’s a new girl in town. First up – Baby News!

Dante Falconeri (Dominic Zamprogna) is moving full speed ahead with Lulu Spencer (Emme Rylan) on their new bay project and shares the news with his mom Olivia Falconeri (Lisa LoCicero). Olivia has her own baby problems to deal with – she hears Julian Jerome (William deVry) on a call and thinks it’s about Leo and gets worried that he’s found out her secret.

Ned Ashton (Wally Kurth) is back in town briefly and tells Olivia she should just tell Julian the truth. Too bad Alexis Davis (Nancy Lee Grahn) is one step ahead of Olivia – she had that pacifier DNA tested and finds out the “new” baby is really Leo.

Julian’s world is rocked when Alexis drops the bomb on him that his son is still alive and Olivia has him in Port Charles right under his nose. Alexis offers Julian advice – is it to go for custody now or wait to entrap Olivia and have a better shot at winning custody later?

Julian may not be able to be calm and wait this out – he’ll want little Leo in his arms right away. This situation is heading for an implosion and Olivia likely won’t come clean before it blows up in her face. But that’s not the only baby mama drama in Port Charles this week!

Sabrina Santiago (Teresa Castillo) decides not to tell Michael Quartermaine (Chad Duell) that she had a farewell tryst with Carlos Rivera (Jeffrey Vincent Parise). The big question is, does Sabrina know 100% that the baby is Carlos’s or is there a chance it might be Michael’s?

Timing indicates the kiddo is Carlos’s baby but Sabrina lets the lie carry her away and doesn’t admit the truth about paternity doubts. Michael tells her he’s happy about the baby and their bond deepens. Michael will share the news with Sonny Corinthos (Maurice Benard) and Carly Corinthos (Laura Wright) that a grandbaby is on the way.

Bad News for Sonny and Dante…

Baby news does not make up for bad news Sonny gets this week. It turns out his complications from the shooting and surgery are worse than they previously thought. Is Sonny told he might not walk again? Carly, Michael and Morgan Corinthos (Bryan Craig) stand behind the Teflon Don during his crisis.

Also, Sonny wants Michael to stay out of his business and gives him a direct order that Michael will likely ignore. Nathan chats up Dante and encourages him to tell Lulu the truth about sleeping with Valerie Spencer (Brytni Sarpi) before they commit to having another baby.

Morgan deals with Kiki Jerome (Hayley Erin) drama this week in addition to Sonny drama. Morgan runs into Kiki boozing up at the Haunted Star and tries to get her back to reasonable and rational. Kiki isn’t interested in that and goes off on Morgan. Later, though, she plays nice with surrogate mom Nina Clay (Michelle Stafford) and helps her get the apartment ready for a family dinner with Nathan West (Ryan Paevey) and Maxie Jones (Kirsten Storms). Poor Nina is just clueless.

Nathan grills Franco (Roger Howarth) at dinner about his intentions with Nina. Franco is thrown. Nathan is concerned that Franco might hurt his sister and doesn’t want her to have any more pain after the betrayal at the hands of evil mom Madeline Reeves (Donna Mills) and Ric Lansing (Rick Hearst) trying to steal her millions. Nathan is right to worry about his sister, but Franco assures him he has nothing but love for her. Will Nathan tell Franco to get a job and stop mooching off Nina’s riches?

Lulu also notices that her mom and brother Nik’s relationship dynamic seems to be off and wonders what has come between the two of them. Julian gets excited about moving in with Alexis and has a surprise for her – too bad Molly Lansing Davis (Haley Pullos) is not so thrilled. She tells Julian he should just go away. Also, Molly gets a new friend this week named Darby (Jesica Ahlberg) who is a new young character who is rumored to be a permanent cast addition to befriend Molly from school.

All this and more spoilers await excited fans this week on General Hospital. Come back to CDL often for more GH spoilers, fun and news!